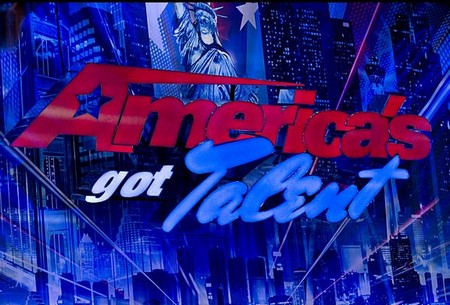 A whole new episode of America’s Got Talent airs tonight as the second part of the AGT premiere continues.  AGT is heading to San Francisco for another round of open auditions.

On last night’s show we got to see the debut of Radio shock-jock Howard Stern.  Everyone expected Howard to be himself but it was a more toned down Howard last night.   He took a seat on the judges panel next to previous season’s judges  Sharon Osbourne and Howie Mandel, he was brutally honest but he was nice and compassionate at the same time.  I expected to dislike him, but I really liked him, he brings something different to the AGT.

Some of the standout performances of last night were: Street performers Shanice and her father Maurice who floored everyone with their perfect duet on “You’ve Got a Friend.” Loyalty Dance Team – The urban dance crew nails their performance, pulling a unanimous decision from the judges to send them to Vegas.

Middle-aged singer-dancer Simply Sergio pursued his performing dream, singing “The Girl From Ipanema” and Sharon and Howard hated it.  Sergio pursued them to give him another chance and let him sing, “God Bless America.”  The judges loved it, Howard got up and danced and hugged Sergio and he is moving on.  If you missed the episode you can read our full and detailed recap here.

At the end of the auditions Howie tells St. Louis this is the first time they have been there, but it is not the last time.  Howard says they hit a home run tonight.  Part 2 of the premiere airs tonight as they continue there search.  San Francisco has a lot of heart, but does it have talent?   We will find out tonight!

RECAP: Last night we were just getting started, tonight there are more bizare and confusing acts coming our way. The show starts tonight with auditions in San Francisco.

The first act tonight is David Garibaldi and his CMYK’s combining graffiti art, dancing and music. Wow, they were very good and get a standing ovation from the judges. Howard thinks it’s fantastic and feels like a jerk because he thought they were painting him, Sharon said they incorporated everything to make it a real show and it was extremely well done, Howie believes they have delivered wow. Three YES votes and they are going to Vegas.

Mister Special is dressed like an “Angry Bird” and arrives on stage driving a bicycle that would fit a 4-year old and playing a trumpet. The crowd is booing, Howie didn’t give him an X because he kept thinking there was something more at the end. Howie tells him that he should be very afraid by his performance and get help, Howard and Sharon both give him an X. This guy is just plain embarrassing. Before Mr. Special leaves he confesses to Sharon that he has always had the hots for her, creepy!

A few weird groups come on stage; a bunch of older people not wearing much clothes with pots on their heads, a trio of the worst musicians I have ever seen, a dance group of fat people and midgets all dressed in gold bodysuits (Howard says if he was a serial killer he would wear that outfit just before he killed his victim) and Maurice Green with a green face in an orange suit and matching helmut.

Kim McAfee is next and she’s going to sing some Hip Hop. OMG, if this is hip hop then Kanye West sings country! All the judges give her an X. Howard says that maybe if she were in the shower with a friend it would sound better. Nick feels bad because Kim was supposed to do a duet, so he wants to give her another chance and he is going to fill in for her partner that couldn’t be there. No luck, the judges all hit their buzzers again.

Next we have Cristin Sandu who is going to balance, he is 17 years old and this guy knows how to balance! Sharon is the first one to give him a standing ovation. Howard asks him how he gets the idea to do this at his age and Cristin tells him that he comes from a long line of circus performers, Sharon loved it but admits she was afraid for him, Howie thought it was fantastic but for a million dollar act it is really slow to the build up. The judges vote, Howard gives a YES, Howie a NO and Sharon gives a YES which sends him on to Vegas.

Now we have a dance crew, the Lisa Clark Dancers and they claim they are trained in many different styles of dance. The crowd loves it but I didn’t get that excited about it. Howard admits that he is not a huge fan of dance and starts to zone out, but think he liked is that there many styles, Howie says that he is confused. Howard gives them a YES, Howie gives them a NO and Sharon is really torn, but she gives them a YES anyway.

Another bunch of acts make it through; a magician and musician team, a 14-year old singer with a huge voice and Mike the Juggler who makes juggling cool.

We have an impressionist next, his name is Dave Burleigh and he does a parody of Dancing with the Stars with “real” stars. This guy is so ridiculously good, I love him and so does the audience. Howard says that he has a good command of the audience but needs to have a couple of killer lines and be more edgy, Howie found it was spot on with good material, Sharon tells Dave not to take any of Howard’s advice, he gets three YES votes, he’s going through.

Next we have Luiz Meneghuin who is a nurse and sings opera for his patients. The crowd is on their feet, his wife and daughter are crying and Howie is feeling the emotion. Luiz tells the judges that he was very poor as a child and his father bought a record player and classical music, his father’s dream was for one of his children to sing, but he passed away last year. All three judges give him a standing ovation. Howard says that there is a lot of emotion in this song and he’s converted, Sharon thinks Luiz is fabulous and has a very strong voice, Howie tells Luiz that his father can see him now and he has made his dream come true. All three judges give him a YES.

Paula Nelson is 80 years old and she is the next audition and she comes on stage in a walker, her nickname is “Granny G” and she is going to share some information about family values. The music starts, she lets go of the walker and starts rapping. Sharon gives her a standing ovation, the crowd is excited, I thought she was funny but not a Vegas act. Howard tells Paul that she captures America’s heart, Sharon thinks she is quite fabulous but she needs to bedazzle her walker, Howie wants to see more. The judges vote and ridiculously they all say YES and she makes it to Vegas.

Only in San Francisco would we see a street performer named Kotton Kandy in a blue sparkly bikini with hot pink boas and he’s wearing sun glasses while he dances. Howard gives him an X and tells him that with this type of aerobic activity you would think he would be more svelte, Howie is a flat out NO and so is Sharon. Nick is not happy that they are sending Kotton Kandy home, so he joins in and dances with him.

Now we get a bunch of acts that didn’t make it; uniformed older man on their ageing motorcycles, an adorable dog riding on a pony and a woman that strips to her undies and sings “Proud Mary”. Then the strangest act makes it through; a maintenance man who sings using his broom as a flute.

Tim Hockenberry is next, he started singing in 1992 and wanted to do something before he turned 50, that’s in just a few months. Tim plays the keyboard and sings “You Are So Beautiful”, he sounds like a mix between Joe Cocker and Stevie Wonder. Howard is glad he is going first and calls Tim a breath of fresh air, Howie thinks he is a phenomenal talent and tells Tim that his life is about to change, Sharon loved that he sang with great emotion and she thought his voice was really good. Three YES votes, he’s off to Vegas.

Yet another dance crew, Funk Beyond Control. Boring and they messed up a few times. Sharon says it was really high end and she loved the look of them, Howard thought they were really compelling and enjoyed it, Howie thinks they have a lot of energy and loved that they mentioned his name. Time to vote, they get three YES votes. I guess they have to fill some of the spots, this dance crew will be out of the competition before you know it.

Next are a few acts that made it through; the Emily Ann band, the judges love them and they make it through, Kalon Irskin does some stand up and impresses the judges and a martial arts line dance company makes it through with a lion performance.

Alonzo Jones, his stage name is Turf and he is an extreme contortionist dancer. Howie is up on his feet, the crowd loves it and I love it. Turf tells the audience that his is his dream come true. Howard says that he loved that Turf came on the stage and took his time because every move counted, Sharon tells Turf that he has paid his dues and it is his time on the stage, Howie says that this is magic. Turf tells all the kids out there that didn’t think they could do it, they can do anything. Howie says this is an amazing moment and his life is about to change. It is three YES votes and Turf is going to Vegas. The end!

Don’t forget to come back next Monday and Tuesday for more awesome recaps of America’s Got Talent when they visit Howard’s home town.