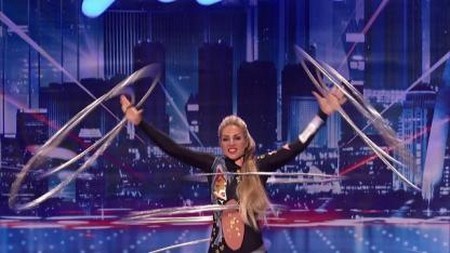 On last night’s episode we got to see a brass band, an escape artist and a TV theme singer.  The judges complained that they were too hot in Tampa, Florida.  Howard Stern actually complained that he was ‘sweating like a pig.’  To bad the acts were not very hot last night.  Although the acts last night were so so, the judges were kinda.  Perhaps to make up for Howard making a seven-year-old cry last week.

Our favorite performance from last night was Inspire The Fire. Sharon honestly thought she was watching a production on Broadway, it was urban and edgy, she loved it. Howard thought they were  up-beat, they could sing and dance, he hates Glee but he loved them.

Howard loved what they are going for the great cause, they are phenomenal.  They also help connect young people with their talents in the hope they will lead inspirational lives.  If you missed the episode you can read our full and detailed recap here!

RECAP: Tonight the auditions are in St. Louis and last week Howard brought his parents to the show, this week Howie brought his mom.

The first act is Tom Bonham and he is a Puppeteer and he really sucks. Howard is the first one to hit the buzzer, with Sharon following rather quickly. Howie called it atrocious and tells him not to give up the dream. Sharon thought it was dreadful. Howard things the guy is terrible and says no.

Lucy sings and plays the drums and is terrible. The judges send her packing. Next is tattoo girl and she busts beer cans with her two hands. Now, a dancing chicken named Gerry and a cowboy on a unicycle; all go home.

Next is a six year old singer and dancer, his name is Isaac Brown. Howie tells him that he has the whole package. Howard tells him that there are a lot of children that come on the show are annoying, but he loves him already. Sharon says he has star quality. Three YES votes get this adorable boy off to Vegas.

The world’s youngest escape artist is next, his name is Spencer and he is hanging upside down in a straight jacket and has to release himself before the rope burns on this horrific steel contraption that can kill him if he doesn’t release himself. The kid does it and my guess is that he is going right to Vegas. Howie is mesmerized, he loves Houdini and loved Spencer. Howard is unsure if the contraption could actually kill Spencer. Sharon want to know what else he can do, Spencer tells her more fire, more bone crushing and he’s going to Vegas.

Next we see Clark Academy, they are a group of girl cloggers and get through to Vegas. A violinist that blows everyone away also makes it through. Jake Wesley Rogers is next and he looks like Birber’s nerdy cousin, the judges love him so it’s three YES votes.

OMG, not another Ozzy impression! Yep, like one Ozzy isn’t enough. It’s the one and only Little Ozzy and he’s singing the song that Ozzy sang for Sharon. Wow, the audience is booing and everyone hit the buzzer except Sharon and she tells Little Ozzy that he makes her miss her husband is away. Howard tells Little Ozzy to come down and hug Sharon, the guy is overwhelmed, I think that was better than a win.

The Cut Throat Freakshow is next; a girl walks on broken glass, then she jumps up and down in it and if that wasn’t enough she stands on her hands in the broken glass. Now for the sickest, one of the guys lifts a chair with his eye lids. The last guy swallos a sword. Howard thought it was the sickest, but he enjoyed it. Howie gives thema YES, he thought they were good, Howard also gives them a YES but Sharon won’t – they make it to Vegas.

Next is a super happy guy named Ron Christopher Porter, his dream is to be a voice over. Howard isn’t impressed and the poor guy is heartbroken because this is his dream. Nick feels bad and consoles him. Howard tells him that he doesn’t think this is actually an act. Howard is a NO, Sharon is also a NO. But, the judges tell him to hang out with Nick while he introduces the acts.

Curtis Cutts is singing Give It To Me Baby by Rick James. It’s a NO from all the judges, but Nick and Ron Christopher Porter want him to do it again, they will be the background dancers. Wow, what an awesome performance, the best part of the show hands down. We definitely need more of Nick!

Next week all our “X’s” are in Texas and there is an act so surprising that it is going to change the competition.