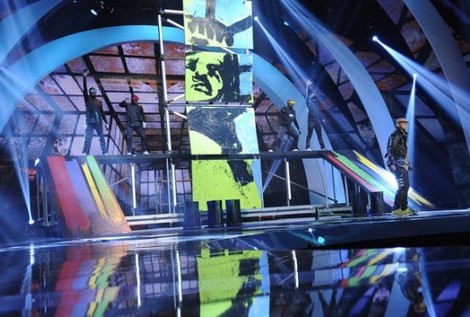 America’s Got Talent airs tonight with a whole new episode on NBC.  Tonight on a new episode it is the ‘Semifinals, Week 2 Eliminations’ , Twelve semifinalists performed last night in the last night of the semi-finals, but only three acts can move on to the finals tonight!   If you missed it, you can read our full and detailed recap HERE.

On last night’s show it was hard to believe that the 12 acts last night could surpass week 1 of the semi-finals, but they were just as good.  It was the acts last night to impress the judges and several of them did.  To quote Howie Mandel, “This is the best semifinals ever in the history of ‘America’s Got Talent,'” and I have to agree!  Who will move ahead tonight?  I have no idea, it’s all up to America tonight.   Who do you think will move ahead?  Hit the commments and let us know!

On tonight’s show there is only three episodes left and the competition is getting fierce.    The six acts to perform in the live finale are revealed.  The votes are in and the final three acts from the previous night move on to the Top Six. The final six acts will go on to perform one last time for America’s vote and the chance to win $1 million and the title of most talented act in America.   On tonight’s show there is a special performance by Gym Class Heroes with Ryan Tedder.

As to last week’s ratings America’s Got Talent  Tuesday week 2  performance show was down 8% from last week and tied for the series’ lowest Tuesday performance to date.

Tonight’s episode: By the end of the show tonight, three acts are going through to the finals. First, Nick calls Shanice and Maurice Hayes, All That!.and Lightwire Theater to the stage. America has voted, in no particular order the first of the top four acts is Lightwire Theater.

Well, that is two acts now in the top 4, Lightwire Theater and David Garibaldi and his CMYK’s.

Master Illusionist, Nathan Burton straight from the Flamingo in Las Vegas puts on a performance that wow’s the judges and the audience.

Time for some more results, Olate Dogs, All Wheels Sports and Clint Carvalho and his Extreme Parrots are all called up to the stage. The third of the top four acts is Olate Dogs.

The final three acts are called to the stage, Tim Hockenberry, The Untouchables and The Magic of Puck. The final act going to the top four is The Unbtouchables.

The top four acts are Lightwire Theater, David Garibaldi and his CMYK’s, Olate Dogs and The Untouchables.

It’s time to find out who has made it to the finals. The act taking the first spot into the finals is The Untouchables. The second act making it through and taking the second spot is Olate Dogs. It’s down to the final spot, it is either Lightwire Theater or David Garibaldi and his CMYK’s. Now, it’s all up to the judges to decide who they want to have that final spot in the finals. Sharon thinks both acts are way too talented to be put in this position, but she has to make a decision, she chooses Lightwire Theater. Howie thinks it is a travesty because both acts are amazing, he chooses David Garibaldi and his CMYK’s. It is now up to Howard, he tells David that he stumbled last night then he tells Lightwire that they did nothing wrong, they were phenomenal. Howard says the act that he would pay money to go see is David Garibaldi and his CMYK’s.

The final three acts going to the finals are The Untouchables, Olate Dogs and David Garibaldi and his CMYK’s.