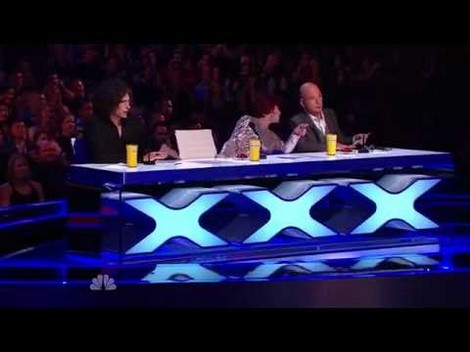 America’s Got Talent airs tonight with a whole new episode on NBC.  This is it there are no more second chances the acts had to bring it last night or are going home tonight, this is the end of the semi-finals.  Tonight on a new episode it is ‘Semifinals, Week 2 Performances′ , the twelve remaining semifinalists take the stage, but only three can move on to the finals!   If you missed it, you can read our full and detailed recap HERE.

On last night’s week’s show we had the first week of the semi-finals it was one of the best performance nights this season so far.  Four  contestants moved on: Joe Castillo;  William Close, Todd Oliver & Irving  and Joe Castillo.

On tonight’s show the semifinalists take the stage to fight it out for the final three spots so they can move on to the finale next week.  There are many fan favorite’s scheduled to perform tonight.  We will get to move ahead on Thursday rather than Wednesday this week.  The show is preempted by the Giants/Cowboy football game.

Check out our Fall Television preview below:

Tonight’s episode: Three spots left in the final, who will make it? It’s all up to America tonight. Twelve acts will be taking the stage tonight and in just over a week, we will see who wins Americas Got Talent.

First to try and win a place in the finals is All That!. They have won over Sharon already, but to win over Howard and Howie they are going to have to do a trick that is going to blow their minds.

Judges Comments: Sharon loved the leather, the fire and the water, she hopes America votes for them. Howie finds them one dimensional. Howard thinks they too directional and paid off, he liked the solo in the beginning and the fire and water.

Sebastien “El Chorro De Oro” has talent that is remarkable and tonight he is a Mexican superman that wants to go right to the finals.

Judges Comments: Howie thought it was truly amazing, he was stunned. Howard is not the biggest fan, technically he thinks Sebastien needs to work on his voice, but he is an amazing showman and a Mexican superhero. Sharon thought it was all absolute perfection.

The Magic of Puck is next and the judges warned him that tonight he needs to bring it bigger and wow America.

Judges Comments: Howard thinks the request for something better was met, well done. Sharon loved the whole performance, she thought it was flawless and he raised the bar, he proved her wrong. Howie thought it was wonderful, he couldn’t figure it which made it a truly wonderful act.

Clint Carvalho and his Extreme Parrots needs to bring something better tonight to show that his act is not just a one trick pony.

Judges Comments: Sharon loved that Kitty the parrot didn’t stop through the whole performance (she is 30 years old). Howie felt like he was in a scene from the birds, he thought Clint stepped it up but he is wondering if this just felt like an amusement park show. Howard thinks it felt like a kids party, but to train a bird like that is not easy, three people are going through and he doesn’t think this is a million dollar act.

Jacob Williams is a comedian and would be happy to make it to the finals so his parents won’t make him get a day job.

Shanice and Maurice Hayes, the father and daughter singing duo are next and tonight Shanice is going to be in the spotlight.

Judges Comments: Howard is a big fan but he thinks tonight a moments was missed, Shanice should have come into the spotlight a little more. Sharon thought it was a fantastic song choice, she agrees with Howard that Shanice should have been in the spotlight more. Howie believes that Shanice is the star and should be a solo artist, he also thinks this act right now is a cheesy cruise act.

All Wheels Sports is next, the are promising to step it up tonight with new tricks and Howard told them they better have a “wow” moment to make it to the finals.

Judges Comments: Sharon thinks they did so well and even though they made a mistake, she applauds them. Howard wanted the “wow” moment and didn’t feel like he got it, but he liked the mistake the best because it showed how dangerous it was. Howie thought it was scary and deserves a vote into the finals.

Tim Hockenberry was almost going to quit singing until he came on the show, tonight he has his voice and his instrument to impress America.

Judges Comments: Howie doesn’t deny that Tim is a fabulous singer but knowing the competition, he’s not sure if he is original enough to take it to the next step. Sharon loved the simplicity of the performance, she thoroughly enjoyed it. Howard thought it was the most moving performance from a singer on this stage, no props and song that moved every one, this was great and deserves a place in the finals according to Howard.

The Untouchables have been rehearsing hard and believe they are talented enough to make it to the finals.

Judges Comments: Howard thought it was remarkable, proficient and incredible talent. Howie thinks the hard work paid off and that they are amazing, he couldn’t have asked for anything more. Sharon loved their tango faces, every time is different and their technique is so locked in.

Olate Dogs are superbly trained dogs that love to perform, tonight they have one trick that they think will blow every one away and Bella will be performing it.

Judges Comments: (standing ovation) Sharon is begging everyone at home to please, please vote for them, she loved the dogs, they are angels from above and she wants to see them again. Howard  thinks it is going to be a tough vote, the expertise from these two is unbelievable and they have to be in the finals, Howard begs America to vote. Howie is tweeting live and people all over America love it, he wants to see them and urges America to vote.

Lightwire Theater has all new costumes and characters, they are going dangerous and epic tonight.

Judges Comments: Howie felt like they created a 3D futuristic movie, it is amazing live and he thinks they deserve to make it to the finals. Sharon is sure they are going have their own headline show, she loved everything. Howard loved the originality, it was captivating and held his attention.

David Garibaldi and his CMYK’s are unique and always have us at the edge of our seat. Their inspiration tonight is from New York city.

Judges Comments: Howard is always amazed by what they do and believes they will make it through the finals where they will have to keep it moving a little faster. Sharon loves what they do, she loves their passion and originality. Howie thinks that David is a creator and loved the whole act and thinks they are worth voting for.

This is it for the finals, only three acts will make it through. Don’t forget to come back to Celeb Dirty Laundry on Thursday at 8pm when we live blog the results.