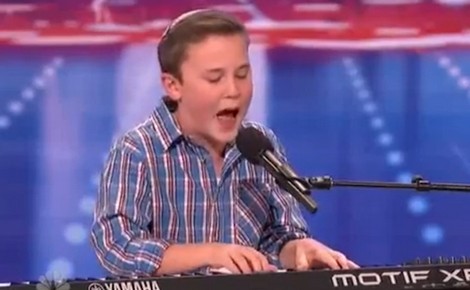 America’s Got Talent airs tonight with a whole new episode on NBC.  This is it there are no more second chances the acts had to bring it last night or are going home tonight.  Tonight on a new episode it is ‘Semifinals, Week 1 Eliminations′ , Twelve semifinalists performed last night, but only three acts can move on to the finals tonight!   If you missed it, you can read our full and detailed recap HERE.

On last night’s show the semi-finales finally began and there were a lot of great performances and some bizarre ones.  According to the judges last night William Close was most likely the winner last night.  As a matter of fact Howie said he deserved to win the whole competition.  My favorite from last night was 14-year-old Edon, he has talented beyond his years.  Edon got a standing ovation.  He sang One Direction’s  “What Makes You Beautiful.”  Edon set many young girls hearts aflutter last night.  What do you think, which three acts do you think should move ahead?  Hit the comments and let us know your thoughts!

On tonight’s show the 12 performers from last night will be whittled down to 3.  Yep, there will be no Top 10 this season, Nick Cannot let that bombshell drop last night.  So tonight we will see who America  decided makes the cut.  The winner will walk away with $1 million and get to headline a show at the Venetian Hotel in Las Vegas, beginning Sept. 26.

This week although “America’s Got Talent” was still the most-watched show on TV last night, its ratings were down some from last week.

Tonight’s episode: Twelve acts performed last night and it was one of the best performance nights this season so far. Tonight, only three acts will make through to the finals, it’s anybody’s guess on who will make it through.

First we get some entertainment tonight from Steve Harvey, who gives a comedic run down on what he thought of last night’s performance and tells everyone that he’s pulling for the comedian, Tom Cotter.

Turf, Joe Castillo, The Scott Brothers are all called up on the stage to find out which act will be in the top 4 acts tonight and out of those top 4, 3 will be moving on to the finals. In no particular order, the first of tonight’s top 4 acts is Joe Castillo. Understandably, Castillo is a very talented artist, but I was rooting for Turf and I certainly hope there is something for him out there as he was extremely talented.

Andrew De Leon, William Close and Academy of Villians are next to find out their fate. These were the top three acts for Howie last night, he thinks America got it wrong. The act moving forward to the top 4 is William Close.

Donovan & Rebecca, Todd Oliver & Irving and Edon are now called to the stage.  My vote is for Oliver, because he’s the cutest dog and the last thing we need in Vegas is another aerial act or another Justin Bieber wannabe. The next act moving on to the top 4 is Todd Oliver & Irving. Awesome! Irving is so adorable, Todd is holding him and he’s dozing off on national TV.

The last three acts to find out their fate is Tom Cutter, Bria Kelly and Eric Dittelman. Howard had nice things to say about all these acts, but only one can be chosen. The last of tonight’s top 4 acts is Tom Cutter.

Howard casts his vote, he is worried about Joe Castillo because he think he ran his course already where Todd Oliver has done better every week, he votes for Irving and his owner.

Sharon agrees with Howard because Todd Oliver has been upping the game every week, but Joe Castillo brings heart and emotion to his performance, she votes for Joe Castillo.

It is all up to Howie, who is he going to put through, he wants originality so he chooses Joe Castillo.