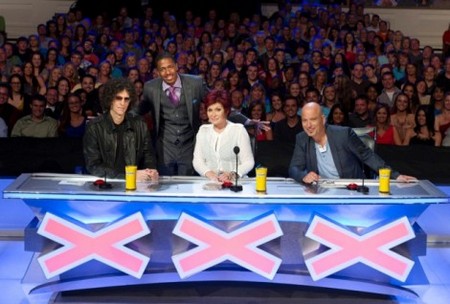 America’s Got Talent airs tonight with a whole new episode. Tonight AGT advances four more acts to the top 24 in quarterfinals. Another twelve acts performed last night in the hopes of winning the million dollar prize, but only four acts will go through tonight from these performances. The show continues in New York City as Howard Stern, Howie Mandel, Sharon Osborne and Nick Cannon continue with their search for the million-dollar act. Did you see last night’s episode? If you missed it, you can read our full and detailed recap HERE.

On last night’s episode, the acts really stepped up their game and gave some awesome performances. Two of my favorite acts were:

All That!, a group of eight cloggers from South Carolina. They are big, buff guys that look like they’d be playing football rather than onstage. Sharon wanted them to come back in leather trousers and no shirts. Howie didn’t know that clogging clubs exist and although they are amazing, he’s not sure they will make it through. Howard thought they needed more isn’t sure that they did enough.

Olate Dogs started back in Chile, a lot of them are rescue dogs. Sharon gave them a standing ovation with the audience, she thought the dogs are magnificent and has never seen a dog act like this in her whole life. Howie thinks they are truly amazing, he has never seen this skill and personality ever in dogs. Howard can’t imagine what is going on in America’s mind, his bull dog died last week and he knows what kind of bond they have with their animals. This is my favourite act to win the competition!

The worst act of the night was, Ulysses with his powder blue suit and fake fro’ he performed the theme from American Bandstand. Lots of younger people dancing along with him still didn’t win over Howard, who still thinks this is no competition for him. Howie thinks this is exactly where he belongs and Sharon is ambivalent at best.

Who were your favorites from last night? Do you think an animal act can make it through to the next round? We will be live blogging America’s Got Talent tonight with all the up-to-the-minute details at 9PM EST so make sure to come back to this spot and watch the show with us. While you wait for the recap hit the comments and let us know what you think of America’s Got Talent Season 7, so far!

Tonight’s show:  Last night was insane and it was the last chance for people to stay in the competition.  Tonight only four acts will move on.  Last night as Howie said was the best night and the worst night.  Too much good talent on one show!

The first results are in:

Olate Dogs, Ulysses and David “The Bullet” Smith.  Sharon says she has no idea at all who is going through.  America has voted the act going to the semi-finals and moving one step closer to the million dollars is OLATE DOGS!  Sharon says she is more than delighted and thanks America for voting them through!

William Close, Unity of Motion and Sebastian El Charro De Oro.  These are three of Howard’s favorite acts.  The horror of last night is standing right in front of him – three great acts and one has to go home.  The act going ahead is WILLIAM CLOSE!  William is honored to be moving on.  Howie tells him he makes beautiful music and William is unique and he is Howie’s favorite.  Howie thinks he is the most marketable star this season.

Eric and Olivia, Horse and Joe Castillo.   Howie thinks any of them can take it.  The act going to the semi-finals is JOE CASTILLO.  Joe says he is honored and humbled but happy.  Howard thinks that Joe is really someone with a heart.  Although Joe draws in the sand, what Howard like is he picks themes that are meaningful!

The judges need to decided between Eric Dittelman and All That!

Sharon votes for All That!

Moving ahead to the semi-finals ERIC DITTELMAN!

Sharon tells All That there is a wild card and she picks All That! to go!

America’s Got Talent is taking a break for three weeks for The Summer Olympic Games.