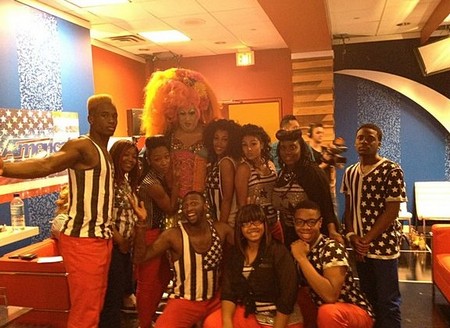 America’s Got Talent airs tonight with a whole new episode. Tonight AGT features another twelve acts who will perform in the hopes of winning the million dollar prize, but only four acts will go through from these performances. The show continues in New York City as Howard Stern, Howie Mandel, Sharon Osborne and Nick Cannon continue with their search for the million-dollar act.

On last week’s episodes twelve acts took the stage and only four moved forward to the next round. Rockstar Juggler Mike Price, Cristin Sandu and Jacob Williams were called to the stage together after their final performance. Comedian Jacob Williams was the only one out of the three to move ahead.

The final eliminations sent home Spencer Horsman. All Wheel Sports and Wordspit faced off, having All Wheels Sports heading to the next round after a performance that impressed judge Sharon, as she was the deciding vote.

Did any of your favorites make it through to the semi-finals? Forty eight acts made it to the semi-finals, only 16 are going through. We will be live blogging America’s Got Talent tonight with all the up-to-the-minute details at 8PM EST so make sure to come back to this spot and watch the show with us.  While you wait for the recap hit the comments and let us know what you think of America’s Got Talent Season 7, so far!

Tonight’s recap: Tonight’s show starts off with a guy trying to make himself a 40 yard human cannonball.  This guy comes from a family of cannonballers.  David “The Bullet” Smith could easily die doing this. Exiting the barrel at 60MPH and he reaches that speed in a tenth of a second.  He makes it 70 feet high in the air and through the field goal posts. Howard Stern points out the 85 percent of the people that try this kind of thing are dead.  Sharon Osbourne thought he was going to hit the post and it would be all over with. Howie Mandel says he defies everything by doing what he does. Howie’s question is, what will he do next.

All That! is a group of eight cloggers from South Carolina.  They are big, buff guys that look like they’d be playing football rather than onstage.  Never thought I’d see anyone clog to Black Betty, let alone a crew of guys but they actually pull this off.  Sharon requests that they return in leather trousers and no shirts.  Howie didn’t know that clogging clubs exist.  He thinks that they are amazing but on this night they may not make it through.  Howard agrees with both of them. He thinks they needed more and he isn’t sure that they did enough.

Ulysses is not everyone’s favorite on this show.  In his powder blue suit and fake fro’ he performed the theme from American Bandstand.  Lots of younger people dancing along with him still didn’t win over Howard, who still thinks this is no competition for him.  Howie thinks this is exactly where he belongs and Sharon is ambivalent at best.

Sebastian El Charro De Oro is a ten year old that sings mariachis. He loves that it allows him to sing about love. He plans on serenading his future girlfriend with the song he’s singing tonight.  Sharon gave him a standing ovation and loves what he does.  Howie tells him that he has an old soul.  Howard thinks he is terrific and wise beyond his years.

Eric Dittelman is a mind reader that started doing magic around fifth grade.  He uses cases and models holding them.  The judges tell him which to get rid of and somehow he did know the last case they’d pick. Howard thinks he keeps getting better. Howie thinks he’s the real deal. Sharon thinks all of America will be talking about him tomorrow.

William Close almost gave up his craft after a fire burned down everything he owned in the world, but he gathered the strength to rebuild and return to the profession he loves, making music. He gets one of the biggest standing ovations yet. Howie says that he thinks he won the whole competition, he calls his performance amazing. Sharon felt that there were a couple of times that she was totally amazed and she has never seen anything at this professional level, over and above anything she has ever seen. Howard’s first thought was give him the million dollars, he wanted to find an extraordinary act and he did.

Unity of Motion is just not another dance act, they are in the studio more than they are at home. Their choreographers have been teaching them since they were two and three years old. The girls are up to the pressure, they believe they can deal with it. Howard thinks these girls are the best dance act they have, but there is tough competition tonight. Sharon says it was absolutely perfect, it was really “A” class, she urges all their friends to call. Howie also thinks they are really good, but he feels the bar has been raised and doesn’t believe they were spectacular enough to make it through.

Eric and Olivia are a couple, well on stage anyway. They met as fresh man’s at the university of Texas, he writes and plays the guitar, she sings. They both believe their talents by themselves are not nearly as good as when they are together. Sharon loves what they do, four people can go through and America is going to have a tough time deciding. Howie really believes this act is more lounge or coffee house than million dollar act. Howard felt there was no emotional connection in this song, tonight is the toughest night and he thinks it might be a huge disappointment for them.

Lindsey Norton started dancing from watching Cirque de Soleil, she is more of a tomboy and loves to ride ATV’s. She feels like she has come full circle tonight, dancing to a Cirque de Soleil theme. Howie thought is was so impressive, so amazing and so unique, just like an Olympic floor exercize. Howard loved her performance and thinks she deserves to go through. Sharon can’t even put it into words, everytime she sees her perform, she loves her just a little more.

When Horse was little, his horse kicked him in the face which resulted in his being afraid of horses forever and the reason for the nickname. A lot of people think he doesn’t take things seriously, but he does. Tonight is a super hero theme, because Horse feels like a super hero with his talent; which is getting himself hit in the privates repeatedly. Howard thinks he is a mad man, very few things make him laugh and if you love “Jackass” you are going to love him. Sharon asks him if his “dangly bits are throbbing” and then tells him it is entertaining. Howie loved that he added a story to his performance, if he could vote, he would vote.

Olate Dogs started back in Chile, a lot of them are rescue dogs and they just might win, afterall the last winner of Britain’s Got Talent was a dog. These dogs were amazing, wow! Sharon is standing up with the audience, she thinks the dogs are magnificent and has never seen a dog act like this in her whole life. Howie thinks they are truly amazing, he has never seen this skill and personality ever in dogs. Howard can’t imagine what is going on in America’s mind, his bull dog died last week and he knows what kind of bond they have with their animals.