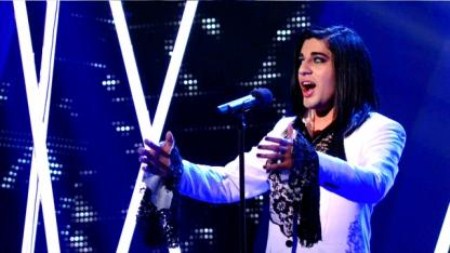 America’s Got Talent airs tonight with a whole new episode on NBC. Tonight is “Wild Card Acts Advance” night where previously voted out contestants will have a chance to come back to the show and make it to the “top 24″, based on their performances last night. Did you see last night’s episode when the Wild Card acts performed? If you missed it, you can read our full and detailed recap HERE.

Last night the acts knew what they were getting themselves in to as they have already been on the AGT stage but were previously voted out. By far the best act last night was Andrew De Leon, he is the 19-year old makeup artist and Marilyn Manson fan that again delivered a stellar performance singing falsetto opera.

The judges loved his performance, here’s what they said; Howard thinks he is the biggest surprise of the season so far, tonight he redeemed himself. Howard thought he was the breakout star of AGT, he tanked in Vegas but tonight he was terrific. Sharon has bet a plate of pancakes to friend and she is going to have to give it to him because Andrew is a star, sensational. I am sure he is going to make it through to the semi-finals.

The worst act last night and might I add that I can’t believe Howard brought him back, is Horse. If Howard Stern himself paid for the tickets, I wouldn’t even go to see this guy in Vegas. It is ridiculous that he was invited back to appear on stage in his underwear and get repeatedly hit in the nuts. I just hope that the voters have more sense than the judges, here’s what they had to say; Howard says “balls to the walls”, he brought it back and appeared in his underwear, he thinks he did the right choice in bringing him back. Howie is speechless and calls him nuts. Sharon feels like she is watching a home video with a bunch of kids on spring break, she doesn’t think there is one man in America that wasn’t affected by what they did.

Tonight’s episode: Last night twelve acts had a chance at redemption, tonight we find out which four acts will be moving on to the semi-finals.

Next, the cast of “Bring It On” performs.

Horse, Jake Wesley Rogers and Andre De Leon are the next Wild Cards to find out their fate.

Sharon is at the edge of her seat, she has no idea is going through. Personally I hope the voters don’t do something stupid like put Horse through. The Wild Card moving on to the semi-finals is Andrew De Leon.

Next is Todd Oliver, Christin Sandu and Spencer Horsman, my money is on Todd Oliver because I love Irving so much. Howard thinks they were all terrific and wouldn’t be upset to see any of them go through. The act going forward and one step closer to a million dollars is Todd Oliver and his adorable dog, Irving, YES!

The last three acts to find out their fate is All That, Lindsey Norton and Jarrett & Raja. The judges are going to decide this one, but first one act will leave the competition and go home, that is Jarrett & Raja. Howard is upset, he thinks Jarrett & Raja were robbed. Howard is the first judge to cast his vote, he gives it to All That. Howie casts his vote for Lundsey Norton. It’s all up to Sharon, who does she choose to move on to the semi-finals, All That.