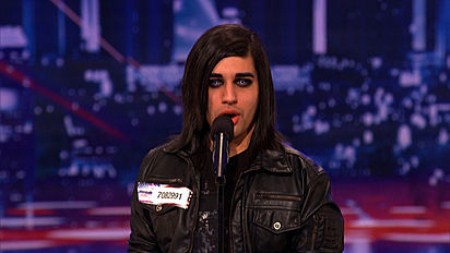 America’s Got Talent airs tonight with a whole new episode on NBC. Tonight is “Wild Card Performance” night where previously voted off contestants have a chance to come back to the show and make it to the “top 24”. Did you see the last week’s episode when the four YouTube acts moved to the semifinals? If you missed it, you can read our full and detailed recap HERE.

Last week various YouTube sensations gave it their best, the last amazing act that was discovered from YouTube on America’s Got Talent in 2010 was Jackie Evancho, Billboard ranked Evancho the #1 Classical Albums Artist of 2011 and I can tell you that there was not another “Jackie” amongst last week’s performances.

There was also a special surprise, double gold medal at the Olympics, Gaby Douglas was on stage. She shared her experience going to London and winning not one medal, but two and she helped Nick with hosting duties throughout the evening.

At the end of last weeks show, four new semi finalists were named; Academy of Villains, Bria Kelly, The Magic of Puck and Clint Carvahlo & His Extreme Parrots.

Tonight some of our favourite eliminated acts return to the stage in the hopes of renewing their America’s Got Talent dream. One of my favourites, Andrew De Leon returns and when he auditioned for AGT it was the first time that he had performed in front of anyone in his life. The 19-year old makeup artist and Marilyn Manson fan gave a stellar performance singing falsetto opera that blew the judges and the audience away.

We will be live blogging America’s Got Talent tonight with all the up-to-the-minute details at 8PM EST so make sure to come back to this spot and watch the show with us. While you wait for the recap hit the comments and let us know what you think of America’s Got Talent Season 7, so far!

Tonight’s episode: They’ve been here, they’ve done it before, they know what they are getting themselves into when they are chosen to return and compete to be a “Wild Card”.

Spencer Horsman is first and he is locked up in a box that is slowly filling up with cement and manages to get him self out when he is completely submerged in the purple cement sludge.

Judges Comments: Howard loved it, he  thinks he is dangerous and interesting. Sharon thinks he really delivered tonight, she loved his outfit, the stage show, well done. Howie thinks this is exactly what the wild card show is about, it got better, it looked very dangerous, he made it work.

Todd Oliver is back with Irving and Todd’s got this thing down to a killer 90 seconds.

Judges Comments: Howard said it was thrills and chills and thanked Todd for taking his advice by doing a topical monologue, it was spot on. Sharon thought the 90 seconds flew by, great material and very slick, a ten in her opinion. Howie thought the material was great, it is tough for America because only four can go through and Todd and Oliver were also great.

Horse is back which is completely unbelievable, like someone is going to pay to watch him hit himself in the nuts in Vegas.

Judges Comments: Howard says “balls to the walls”, he brought it back and appeared in his underwear, he thinks he did the right choice in bringing him back. Howie is speechless and calls him nuts. Sharon feels like she is watching a home video with a bunch of kids on spring break, she doesn’t think there is one man in America that wasn’t affected by what they did.

Ben Blaque was really shocked that he got sent so early in the show, tonight he is ready to aim and win.

Judges Comments: Howard thought it was incredible, they brought the danger, it was exciting. Sharon loved it and wanted to know if they were a couple, they are just friends. Howie thinks they ended the show on an exciting note and can’t believe that they let them go last time.

All That! Cloggers are back and last time Sharon said that she wanted them oiled up and shirtless, will they do it? We get a little booty shake, which I am sure was meant just for Sharon and then one guy rips off his shirt and voila, oil and muscles.

Judges Comments: Sharon said they did not disappoint her and thanked them for using wonderful music. Howie feels it is about context, but being honest he didn’t think it was exciting enough to go beyond tonight. Howard knows they are talented, but where they run into trouble, is that they didn’t focus on one guy and won’t be enough to get through.

Jake Wesley Rogers made a bad song choice last time, he’s only 15 years old, it will be interesting to see what he does this time. Jake chooses to sing “Edge of Glory” by Lady Gaga.

Judges Comments: Sharon is really proud of him, she loved the whole package, including the outfit. Howie thinks he sang very well, the problem is that he is a singer and there is too much competition. Howard gives him to it straight, he is 15 and lacks the advantage of experience, there is no connection with the audience and he needs to figure it out to move forward.

Bandbaz Brothers are acrobats and they are back tonight performing an act where his grandfather’s cousin died doing the trick.

Judges Comments: Sharon thought it was something she had never seen before, really breathtaking, their timing was superb. Howard thinks it takes tremendous strength, they risked their lives and they pulled it off. Howie thought it was crazy that they did something that a family member died at trying to previously do.

Lindsey Norton is excited to be back and admits that she will need more stamina and endurance with tonight’s performance.

Judges Comments: Sharon thought is was very good, she did very well. Howard thinks she is beautiful to watch and we’re having a night with so much talent that he hopes she doesn’t get over looked. Howard thinks she deserved to have been called back, but he is concerned it might be a little tough for her to make it through.

Jarrett & Raja are a magic show and tonight they consider a gift and their last chance, will they do it this time? If you like disappearing baby grand pianos, then they did.

Judges Comments: Howie is proud, he loved it and says the audience was wrong last time, this is great. Howard thinks they redeemed themselves tonight, they took out the cheese and he loved the illusion. Sharon thought it was spectacular and thinks they should be very proud of themselves.

Cristin Sandu is ready to finish what he started tonight, it’s all in his mind and he is ready and more confident.

Judges Comments: Howie brought him back because he felt that he put him under a lot of pressure last time, he’s sorry that he fell this time. Howard thinks he is exciting, very dangerous, he fell but Howard really enjoyed it. Sharon thought it was incredible, called him Mr. Dangerous and she admires him.

Sebastian El Charro is back and since he left AGT he has been getting more attention but his heart belongs to Sharon.

Judges Comments: Howie says he is more than a singer, he is an entertainer and loves how he brought his culture into his routine, a real star. Sharon loves him, he took a big risk by singing in English but everything he did was superb. Howard loves his outfit, he is charismatic, but it’s going to be close.

Andrew De Leon is excited about his second chance and hopes his nerves don’t get the best of him, he needs to prove to himself that he can do it.

Judges Comments: Howard thinks he is the biggest surprise of the season so far, tonight he redeemed himself. Howard thought he was the breakout star of AGT, he tanked in Vegas but tonight he was terrific. Sharon has bet a plate of pancakes to friend and she is going to have to give it to him because Andrew is a star, sensational.

That’s it for tonight, all the acts were amazing, it will be a tough call to see which four acts are going to make it to the semi-finals.