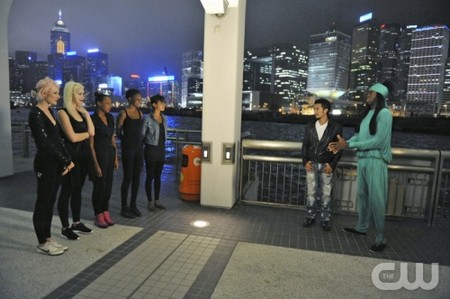 I am looking forward to a new episode this evening of one of my favorite shows which is America’s Next Top Model.  It airs tonight on the CW at 9PM and tonight’s episode is called “Nicholas Tse.” Standby by as we live blog the episode with all the up-to-the-minute details.

On last week’s episode   the final six women head to Macau, where they get a reading from an astrologer and are challenged with re-creating their auras through fashion and beauty. At the photo shoot, the models have to pose in exquisite silk gowns, while accessorized with silkworms crawling on their bodies.  After the photoshoot Catherine, 22, from England was sent home.  Although the judges liked her she just wasn’t bringing it to the photoshoots.  If you missed the episode you can read our full and detailed recap here.

On tonight’s show the models visit Hong Kong and are challenged with having to learn a fight sequence and act in a scene with Nicholas Tse, international actor and pop star. The pressure is on as the women have to pose while harnessed atop a high rise tower in extreme rain and wind. Kelly Cutrone and Nigel Barker join guest judge Nicholas Tse as well as Tyra Banks on the judges’ panel for elimination.

Who are you rooting for?  My favorite is still British model Sophie..  Hit the comments and let us know who your favorite model is!

Tonight’s episode: Tonight’s show opens with the girls getting back to the house and Laura’s best photo is displayed. she finds a gift on the table for her. Eboni thinks that Laura hates her. Actually Laura thinks that she is a spoiled little brat.

Alisha and is upset she is in the bottom 2 again. Each time she goes on a photoshoot she gives 200%. Analiesse is happy she feels like she is progressing.

The girls get Tyra mail – they are heading to Hong Kong . They meet with Miss Jay and he welcomes them to Hong Kong. They meet one of the hottest new movie and popstar today Nicholas Tse. The girls are having a challenge and they will have to learn some lines and some karate moves. The winner will get a trip back to come back to Hong Kong.

The girls practice and Laura gets to practice with Nicholas Tse since she won best picture.  Eboni was not pleased.  When the girls get filmed they have one take.  Alicia thinks she did the best.

The winner of the challenge and the girl who will come back to Hong Kong and be in Nicholas TSE’s music video is Laura.    All the girls felt Laura seducted Nicholas.  Eboni makes a comment and says that Laura is sleeping her way to the top.

Laura goes insane at Eboni.  The girls get Tyra mail they are having a photoshoot.

When they get to the shoot Mr. Jay is there he tells the girls he knows some of the girls are afraid of heights but today they are doing a photo shoot on the Macau Tour which is 760 feet high.  They will be outside and Nigel will be taking the photos. A lot of the girls don’t think they can do the photo shoot. They’re terrified!  The girls will be in harnesses outside.  Nigel asks Sophie if she wants to go first-but she says no. He asked for volunteers and Laura volunteers.  Laura reconsiders because she realizes that Laura is her biggest competition and she agrees to go first.  As Sophie poses she is holding a cable and they try to get her to let go the cable and pose without its. Sophie tells Nigel she cannot do it.

Analiesse – They love her pictures, she looks like a warrior!  Kelly has nothing bad to say!

Alicia – The pose is odd but Nigel thinks she could have done better.

Sophie – Nicholas thinks her picture is awesome but of course Kelly does not like it.

Eboni – Kelly does not like her shot and Nigel thinks her face is all wrong.  Tyra thinks Eboni does not understand her angles.

Laura – Kelly loves her picture and Tyra thinks the picture is absolutely beautiful.

RUNNER UP FOR BEST PHOTO: SOPHIE

EBONI WAS ELIMINATED but then Alicia tells them she wants to leave because she cannot stay.  She asks Tyra to keep Eboni but Tyra tells her if she leaves Eboni still leaves.

ALICIA leaves too her decision!