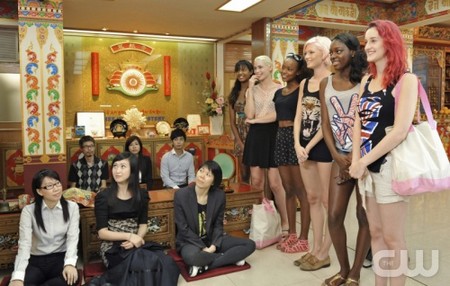 We are looking forward to a new episode this evening of one of my favorite shows which is America’s Next Top Model.  It airs tonight on the CW at 9PM and tonight’s episode is called “Barney Cheng.” Standby by as we live blog the episode with all the up-to-the-minute details.

On last week’s episode the girls went to Siren Studios and they wore couture designs that were totally covered by Hello Kitty.  The photographer for the shoot was Anne He who is 16 years old.  Seymone spent a lot of time complaining and being temperamental during the shoot and in the end the judges did not like her pictures.  19 year old Seymone from Atlanta was sent home.  If you missed the episode you can read our full and detailed recap here.

On this week’s episode called ‘Barney Cheng’  the final six women head to Macau, where they get a reading from an astrologer and are challenged with re-creating their auras through fashion and beauty. At the photo shoot, the models have to pose in exquisite silk gowns, while accessorized with silkworms crawling on their bodies. Yuck! Kelly Cutrone and Nigel Barker join guest judge Barney Cheng as well as Tyra Banks on the judges’ panel for elimination.

Who are you rooting for?  My favorite is British model Sophie and she had best picture again last week.  Hit the comments and let us know who your favorite model is!

Tonight’s Episode: Eboni is relieved to still be in the competition.  Laura feels like it should have been Seymone who stayed in the competition. Laura does not like Eboni she thinks she’s been.  Analiesse says that  Eboni spends a lot of time looking in the miracle at her beauty.

Someone knocks at the door, it’s Nigel and he has Chinese food for the girls. The girls are happy to hang with Nigel because they get to know more what the judges want of them.  Nigel is the girls joined fortune cookies.  Nigel opens his fortune cookie and it says that they are all going to Macau.  The girls are really excited, and then they are told they’re leaving immediately.

The girls arrive in Macau and Mr. Jay meets them.  The hotel is swanky and the girls are met with Singer is and dragons.  Mr. Jay gives them the key to their room. When they get there they feel like they are millionaires. The shower is so big 10 people could fit into it. The view is spectacular.

The girls get Tyra mail- The girls go and meet Ms Jay who introduces them to Clement Chen and his astrology students.  He tells the models he is going to do a reading of them.

Laura won the spa at Six Senses Spa and she gets to choose one team member. But because there is only one US team member left besides her Eboni gets to go.

Mr. Jay fashion is always about pushing fashion one step further. Their photography for the day is Paul Sang.

Annaliese – when she first started to show emotion on set it was little pantomime and not genuine. But she took direction very well.

Laura – she loves bugs. So they don’t really bother her much like the other girls.  Laura when awkward, bizarre she was genius.

Eboni – she realizes she really has to do well she has to redeem herself.  Eboni’s performance was a little middle-of-the-road.

Katherine – was having problems with the shoot – there was something no working and Mr. Jay cannot figure it out.  She was delivering the emotion but her poses were wooden and stiff.

Alisha – she wants to have another best photo week.  Mr. Jay is not sure what she’s trying to do.   She had problems because she kept posing with every position and Mr. Jay didn’t want her to do that.

Laura – Laura tells the panel she loves bugs.  Nigel loves her picture-he thinks it is stunning.  Kelly cannot even believe that it is her comment is the most amazing shot. It is unbelievable-she thinks she looks unbelievable.  An incredible picture.

Eboni – Kelly loves her she thinks it is her best fashion shot yet. Tyra doesn’t like it she thinks her head is too attached to her body she doesn’t show her neck.  Nigel loves the body language. But her neck is a disaster.  Kelly feels like they love her in person but she is not bringing it.

Katherine – Tyra thinks that Catherine is so much better than this.  Barney thought there was too much emotion in it.  the justice all like her, but she is not doing it.

Analiesse – Nigel thinks the picture is stunning.  Kelly asks what her hand is doing on her head.  Kelly thinks it is one of her best pictures but she doesn’t think she is a model. She thinks she should be a TV host.

Sophie – Nigel thinks the shot does not really work for him. Tired doesn’t think the pose is amazing.  Nigel thinks it is average.

RUNNER UP FOR BEST PHOTO – ANNALIESE