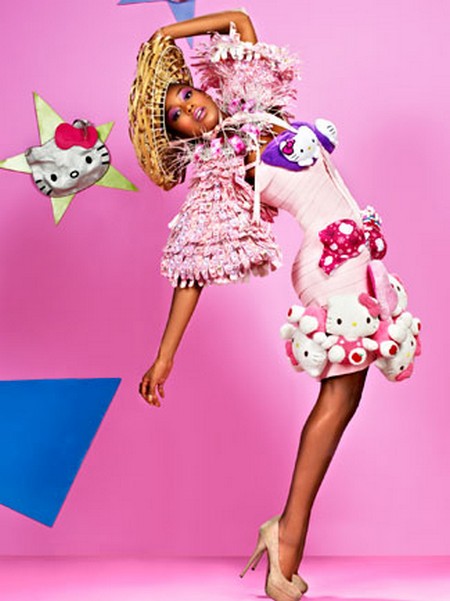 We are looking forward to a new episode this evening of one of my favorite shows which is America’s Next Top Model.  It airs tonight on the CW at 9PM and tonight’s episode is called “Georgina Chapman.” Standby by as we live blog the episode with all the up-to-the-minute details.

On last week’s episode the girls had to do a PSA – the judges were not pleased with Kyle’s picture and Kelly said she was getting worse each week.  The judges agree with her and Kyle was eliminated.  If you missed the episode you can read our full and detailed recap here.

On tonight’s show the women compete to open a fashion show –  the models go to castings for the opportunity to open a fashion show for one of the Dorchester Collection Fashion Prize finalists with fashion’s elite, including Marchesa’s Georgina Chapman in attendance. At a photo shoot, a few of the women struggle while modeling heavy Hello Kitty couture gowns. Kelly Cutrone and Nigel Barker join guest judge Georgina Chapman as well as Tyra Banks on the judges’ panel for elimination

Sadly we had bad news this week – in a shocking move Tyra Banks  cleaned house at America’s Next Top Model and fired photographer Nigel Barker, runway coach Miss J, and creative director Mr Jay. I will miss them – what do you think of the firings?  Do you think American Idol can survive without them?

Tonight’s recap: Sophie gets back with the ladies and sees her pic.  She is thrilled she won best picture.  Alicia is upset about what the judges told her at panel and she vows to try harder.

The girls get Tyra mail and realize they will have a cat walk challenge.

The models arrive at the The Beverly Hills Hotel. Everything is so extravagant and elegant-it looks like a different time.. They get to the pool and Kate Cutrone is there – she tells him tonight she is going to be seen by some of the most important and powerful fashion industry people. They’re getting a chance to open a fashion show.

The four designers they are about to meet are going to stage a runway show. The model who wins to open the shell wins a trip to a Dorchester Hotel. Even if the models don’t get the chance to open the show they will be in in the show.

The girls have to walk for the designers and Kelly is watching. Giuletta designs are inspired by the 60’s. Julian Louie designs are very graphic. Siki Im designs a mens wear women collection.

Kelly thinks the ladies have to pic it up, no one is slaying it.

Kelly takes the girls aside and talks to them about what went wrong during their walk.  She tells the girl she will be around and tells them not to disappoint them.

Symone is upset about what Kelly said to her.  The girls are remind her of the mood she got into in Toronto – she is sulking.

Kelly goes over what shows the girls booked.

The designers have $40,000 riding on the opening – the designer that does the best gets that money.  It is the Dorchester Collection Fashion Prize.

There are a huge number of important people in the crowd.

Alicia lived up to the designer’s expectations.

Sophie was very dynamic in the Siki Im show.  Giuletta thinks Sophie has a bit of Twiggy in her.

The winner of the Dorchester Collection Fashion Prize is Anndra Neen.  Alicia is excited because she openned their show.

The girls goes to Siren Studios and Mr. Jay tells them they will be wearing couture designs that are totally covered by Hello Kitty.  The photographer is Anne He and she is 16 years old.

The photographer felt Sophie did not have a clear idea of what she had to do.

Annaliese was very fashionable and was glowing.  Symone complains that her hat is pushing into her head.  Mr. Jay is worried her temperment will mess up the shoot.

Eboni really struggled with the shoot and Mr. Jay think the judges will eat her alive.

The girls get mail they are going to panel

Symone – Nigel thought her face looked great – but the pose is fashion 101.  Kelly thinks her picture is stumbling.  Tyra feels it is a little bit show and tell.

Laura – Nigel tells her obviously she likes to bend.  Tyra tells her the photo brings her back to her childhood and she can appreciate the photo.

Eboni – Nigel does not see any playfulness in it.  There is no humor behind the eyes.  Tyra says she has the fierce face.

Nigel – likes her face but her body language is a bit obvious.  They love the strength in her eyes.

Alicia – Kelly loves the picture, she thinks it is fierce.  They think the picture is hot.

Sophie – Kelly loves the silhouette and post but not her face.

Annaliese – They love what she is doing with the pose but they do not like her face.

RUNNER UP FOR BEST PHOTO – SOPHIE