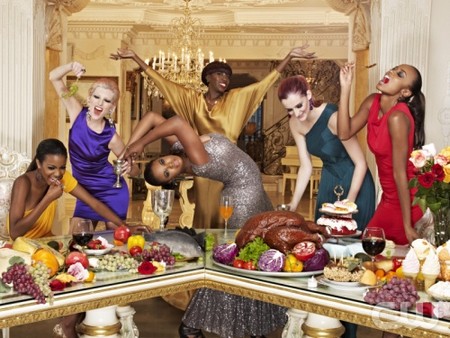 We are looking forward to an amazing episode this evening of one of our favorite shows which is America’s Next Top Model.  The exciting show airs tonight on the CW and I am excited after the shocking elimination of AzMarie last week.

I wonder what will happen tonight as this season crop of tall drinks of water try to win.  Tonight’s episode is called  “Estelle” and that is because the singer will pose with the remaining models during their photo-shoots.

At the elimination last week Tyra told AzMarie she thought that she was going to be a finalist –she even thought she might have won.  Tyra let AzMarie know that it is more than having the personality – she has to commit, be there, be hungry… I bet these models are usually hungry!  Tyra told AzMarie that she needs to learn to cooperate.  During the show last week Tyra gave the contestants booty-tooch lessons and AzMarie refused to participate and Tyra was not pleased.  What, does AzMarie think that, that she is too special – too precious.  Well now she is gone!  If you missed the episode you can read our full and detailed recap here.

On tonight’s episode the women shoot an anti-bullying PSA.  The models are tasked to help with creating a PSA for an anti-bullying campaign with some young volunteers.  The winners of the challenge will receive a personal video message from a loved one. At one photo shoot, singer Estelle models with the women, who have to pose as art installations during a dinner party.

Last week on the show Tyra taught the girls how to do the booty tooch for a reason…  On this week’s episode the models will use what they learned last episode in their photo-shoot.  Kelly Cutrone and Nigel Barker join guest judge Estelle as well as Tyra Banks on the judges’ panel for elimination.

Tonight’s Recap:  Alicia is really happy when they get back to the house. She won best picture so her picture is displayed and there’s lots of gifts. She’s glad because she believes Tyer now understands that the British girls are here to win.

Sophie and rest the girls are upset that Kyle is still here-because she has a bad attitude and she’s wanted to go home.

The girls get Tyra mail-and they believe it’s for their next photo shoot. The girls had to LA studio and meet Nigel and they’re told that they have to do PSA a commercials

The teams will be split into two teams US and UK. Each team will have four girls that they have to put into the video. The winner of the challenge will appear on TV and will receive a personal message from their family or friends.

Each model is assigned a little girl – the models meet with little girls and they tell them their stories.

Nigel really enjoyed watching both teams. Nigel liked the US team he thought it was simple. Nigel love the UK team-however he felt there was little force here and there.

Kyle really wants to win she Speicher family. Nigel decides the winning team is the Brits.

There really excited about seeing their mom and their dads and their friends. They plug in their virgin mobile phones.

The girls get Tyra mail-to Tomorrow they will be the center of attention.

Kyle is determined to nail the photo shoot today. The girls arrivals the most gorgeous mansion ever. Jay Manuell is there he tells the girls they are going to take the Booty Tooch to a high fashion level. There photographer for today is Ben Shaul.

The girls had to hair makeup.

The Cheney introduces the girls to Estelle a British singer from the UK. She gives him advice about me in front of the camera-she tells them they just have to give it that extra little something.

When they’ll walk on stage there is a huge table and Estelle is in the middle. Each model must be an piece of art for the people having dinner.

Laura was having a bit of a hard time-and sometimes when you try hard it doesn’t work that well.

Kathryn became lost on set she didn’t know what to do. Annaliesse did really well.

The girls were all pissed off because Kyle wore her butt pads. So it was easy for her to bootie tooch.

Kathryn – the judges like how she booty touched.  Tyra told her it was perfect.

Alicia – her picture was not great.

Annaliesse – Nigel thinks it is her best shot of the competition.  Estelle loves the photo-Kelly loves it too.  Tyra disagrees with the judges she did not like it as much.

Kyle – Nigel thinks the shot is interesting but he is not please with the pic – Kelly thinks Kyle is going downhill in the competition.

Laura – Nigel thinks the position of her body is so extreme and he is not loving it.

Simone – Nigel would have thought the tooch would be enormous – but it was not.  Kelly loved the shot of her.

RUNNER UP FOR BEST PHOTO – SIMONE