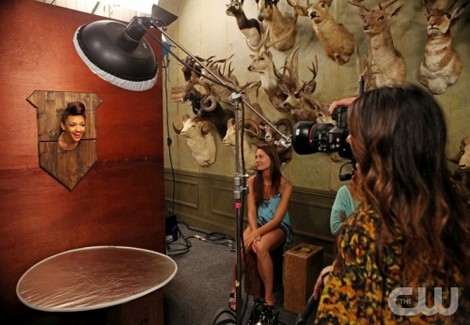 America’s Next Top Model airs tonight on the CW with an all new episode.  Tonight’s episode is called ‘The Girl Who Cries Home‘ and it is the second episode of Cycle 19 ‘College Edition.’  Did you see the premiere episode last week?  We did and we have a full and detailed recap here for you!

On last week’s premiere episode the girls found out who will be entering the sorority house. Thirteen girls had their names called out by Tyra, they were: Kristin; Nastasia; Laura; Allyssa; Destiny; Kiara; Leila; Darian; Maria, Jessie; Brittany; Yvonne and Victoria.

The girls got to see their new house and found a sporty girls room, a geek room and a pink room. Everyonewas so excited and some were already thinking about the competition and know it is going to be fierce.

On tonight’s episode of “America’s Next Top Model: College Edition,” the contestants complete a challenge that leaves them hanging, then celebrity guest photographer Shenae Grimes (90210) shoots the models posing as taxidermy. Viewers are introduced to top fashion blogger, Bryanboy, who joins as the show’s first-ever social media correspondent, while judges Kelly Cutrone, Rob Evans and Tyra Banks team with the judging audience for the first elimination of the cycle.

We will be live blogging America’s Next Top Model tonight with all the up-to-the-minute details at 8PM EST so make sure to come back to this spot and watch the show with us. While you wait for the recap hit the comments and let us know what you think of all the changes they have made to ANTM this season?  While you wait for the recap, check out the sneak peek below of tonight’s episode!

Tonight’s episode:Game is on, the girls are ready to compete and there are some serious new rules as they will be graded for everything, from Tyra, the judges and America.

Tyra shows the girls the “Tyra Suite” that the girl who gets “best photo” every week gets to use it for the entire week along with another girl of their choice.

Also, there will be a challenge every week and the girl that wins that challenge will win $10,000.00 for their college fund, but, they have to win America’s Next Top Model to get the college fund.

Victoria is annoying a lot of the girls, she was home schooled and admits that she is a virgin and loves her online college and being with her mom all the time who is her best friend.

All of a sudden the girls hear stomping on the floor, it’s a group of guys dancing an intro to Rob’s appearance, he tells the girls to get glammed up because they are all going to Hollywood.

The girls head to a club and meet Jonte who tells them they all have to walk down the stage and strut themselves, the best one, will win the key to Tyra’s suite.

Jonte and Rob choose the winner, it is Yvonne for the first challenge, she wins the key to the suite and $10,000.00 towards her college fund.

The girls return from the club and find a challenge scoreboard showing how they ranked. Kiara tells Destiny that she looked like a stripper during the challenge and maybe that is why she ranked low, Destiny is furious about what she said. Kiara goes on to tell her that it was constructive criticism;

Victoria is missing her mom, but some of the girls find it strange how close Victoria is to her mother.

The girls arrive at the photo shoot and Shenae Grimes is there to take the photos, the girls head to hair and makeup then they basically have to stick there head through a hole, it is only their heads that are being shot.

Johnny finds that Kristin has an attitude and has to kill it before she meets a client.  Maria is feeling really removed from the other girls because she graduated from Harvard. Destiny had one look and wasn’t following direction really well. Leila has a nice attitude that Johnny loved.

Kiara is all about telling everyone about her mother having her at 16 years old and claims that because of that she was denied a mother figure. Meanwhile, Victoria doesn’t lack a mother figure, she calls her on the phone and breaks down and when one of the girls knocks on the door and tells her she has five more minutes, she is wreck.

Thirteen girls stand before Tyra, but only twelve photos are in her hands. The person with the highest score and best photo is Leila, she gets the key to Tyra’s suite. Runner up is Nastasia. The next name is Brittany, then Laura, then Kristin, then Kiara, then Yvonne, then Allysa, then Victoria, then Darian, then Maria. The two girls with the lowest scores are Destiny and Jessie and one of them will stay in the competition and that is Destiny.

But this is not the end of Jessie, she will have a chance to compete in all the challenges and get back on to the show.