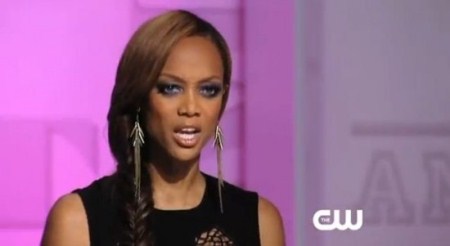 America’s Next Top Model airs tonight on the CW with an all new episode. Tonight’s episode is called “The Girl Who Wants Out” and it is the third episode of Cycle 19 ‘College Edition.’ Did you see last week’s episode? We did and we have a full and detailed recap here for you!

On last week’s episode the girls headed to a club and met Jonte who tells them they all have to walk down the stage and strut themselves and the winner will win $10,000.00 towards her college fund. Jonte and Rob Evans choose the winner, it is Yvonne.

Next the girls head to a photo shoot and Shenae Grimes is there to take the photos, the girls head to hair and makeup then they basically have to stick there head through a hole, it is only their heads that are being shot. After the photo shoot, thirteen girls stand before Tyra Banks, but only twelve photos were in her hand. The person with the highest score and best photo is Leila, she gets the key to Tyra’s suite.   In the end, Jessie was eliminated, but this is not the end of Jessie as in a new twist, the girls who have already been eliminated will be given the opportunity to return to the competition via votes on their photo shoot pictures.

On tonight’s episode,  the girls have to head to the Cristophe Salon in Beverly Hills where they will have their hair bleached, chopped and dyed for their makeover challenge (my favorite episode). The competition will get tough when the girls have to strip nude for photo session that is artfully shot by celebrity photographer Tony Duran. One of the girls will refuse to strip down to her birthday suit alongside super hunky Rob which could forever alter her modeling career. I have a feeling it is Victoria, the homeschooled girl who is desperately missing her mommy.

Tonight’s episode: The girls return from the judges panel and Leila is on cloud 9 for having won best photo in the last episode. Leila gets to choose one girl to join her in the Tyra suite, she chooses Laura. Darian is jealous that Leila is in the Tyra suite. Tyra mail, “Who’s Gonna Make The Cut”, it is time for the makeovers.  Maria doesn’t want her hair cut and is not going to let them do it. Allyssa thinks Maria should go home with her lousy attitude.

The girls all head over to the Freestyle salon to have Christophe redo them. This time, the girls get to choose whether or not they want to get made over, Maria says “hell no”, Victoria also said no but all the other girls said yes.

The girls who have opted to participate have a really good attitude about it. Tyra sits down with Victoria and asks her why she didn’t want to get made over, Victoria tells her it is because of her Cherokee roots that she is proud of. Tyra goes on to show Maria and Victoria what their makeovers would have been and she is clearly disappointed in the two of them.

Destiny is feeling unconfident and hopes that the make over will make her look more feminine. Tyra assures her that she is going to look really hot and beautiful.

Kelly Cutrone has a chat with Maria about her not wanting to be made over and after a few minutes, Kelly walks away in disgust.

P’Trique enters the salon and he has Tyra Mail and pretty much revealed that the girls are going to be getting naked.

Back at the sorority house, Darian is getting on Kiara’s nerves because she find that she is loud and obnoxious. Daian and Kiara get into it with a real screaming match. Meanwhile, Victoria doesn’t understand what the girls are saying because they keep saying they are “real bitches”.

The next day, the girls head over to a garden for an art class. Famous photographer, Tony Duran, will be taking photos of the girls nude with supermodel, Rob Evans.

Alyssa and Destiny are shocked at Maria’s attitude again today, she always has this look like she couldn’t care less. Maria is in her own world, she is sitting by herself in her robe while the other girls are getting naked for the photo shoot.

Johnny joins the girls and tells them that Maria has left the competition, what is their reaction? Good.

Victoria calls her mom and she is crying a river again – I hope her mother realizes how hard a time Victoria is having being separated from her and realizes that it’s not healthy for Victoria to be feeling this way.

The scores have all been added, the girl with the highest score and best photo is Victoria; she gets a key to the Tyra suite. Runner up is Brittany, then Alyssa, Leila, Laura, Nastasia, Kristin, Destiny, Kiara and Yvonne.

The girl heading home and eliminated from the competition is Darian. Every girl that is eliminated this cycle will have a chance to return to the game, Darian does have another chance but it is all up to the fans.