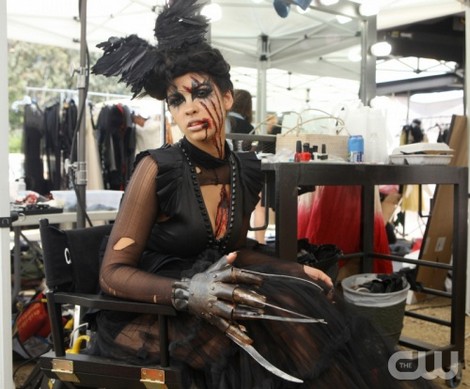 America’s Next Top Model airs tonight on the CW with an all new episode. Tonight’s episode is called “The Girl Who Does What Tyler Perry Says” and it is the forth episode of Cycle 19 ‘College Edition.’ Did you see last week’s episode? We did and we have a full and detailed recap here for you!

On last week’s show  the girls had to head to the Cristophe Salon in Beverly Hills where they had  their hair bleached, chopped and dyed for their makeover challenge (my favorite episode).  This cycle the girls were given a choice whether they wanted to do the makeover and two girls refused much to the disappointment of Tyra and Kelly.

The competition got tough when the girls had to strip nude for photo session that was artfully shot by celebrity photographer Tony Duran.  One of the girls refused to pose nude.    The girl who was eliminated from the competition was Darian. Every girl that is eliminated this cycle will have a chance to return to the game, Darian does have another chance but it is all up to the fans.

On tonight’s show the girls get a lesson in method modeling – Decked out in outrageous costumes, the contestants are taken to the 3rd Street Promenade in Santa Monica to engage with onlookers as Tyler Perry directs them from a surveillance van. Then, they are whisked away to Universal Studios, where they are made up as zombies for a very apocalyptic photo shoot.

Tonight’s episode: Victoria is thrilled that she won last time at panel and tells the girls that all she could think of was her mom and they know she is missing her, but sometimes it’s a little strange how much. Darian made it in the last round by a very slim margin and is determined to redeem herself this week. Kristin is frustrated because she doesn’t understand what the photographers want from her when she is doing a photo shoot. Meanwhile, Kristen is having a hard time getting along with some of the girls in the house, she goes in Destiny’s purse to get something and when she’s called it she makes it look like Destiny did something wrong. Destiny calls Kristen  pretty and mean.

The girl that Tyler feels is the best will win a walk on role in a Tyler Perry production. Tyler loved the girls performances, many of them did so well which made it a tough decision, the winner is Kiera.

Next the girls are brought to Universal Studios to dress up as zombies and be photographed by Ricky Middlesworth who is known for some really dark, glooomy and artistic type of photos. Kristin walks on the set with an attitude and Johnny is not into it and think she often comes off as a bitch. Kristin is really coming off as a spoiled brat and making some of the other women wonder if she deserves to be there. Although Kiara won the last challenge, she is doing too well on this one. Yvonne has the face, but she’s not bringing the body. Leila does very well but Destiny struggles. Tiara sends the girl a message about the next panel and when Victoria starts to read it, Kristen freaks out and tells her stop so she can read it! Kristen is walking a fine line in the house, either she will be sent home because of her attitude at the photo shoots or one of the girls is going to lose it on her.

Time for panel, Kiara didn’t do well and the judges were not very impressed as well her social media is going down. Brittany did well, her fans also lover her. Victoria looked too angelic and the fans didn’t like her pose. Destiny again falls flat, Tyra thinks she doesn’t understand what she has and gets one of the lower scores. Laura did very well and even the online votes loved her. Kristen looked too pretty and Tyra didn’t think she looked like model; fans tell her to kick it up if she wants to stay on the show. Tyra says that Allyssa looked like Mary Poppins in a car accident. Nastasia’s social media score took a little dip while Yvonne looked more like a stripper than a zombie and fell down the social media pole.

There are only nine photos to give out and they are for the girls that are still in the running for America’s Next Top Model. Best Picture goes to Laura and has the highest scores ever in social media. The next photo belongs to Leila, then Brittany, Allyssa, Kiera, Nastasia, Victoria, Kristen. Both Yvonne and Destiny are in the final two, only one girl is still in the competition and that is Yvonne.