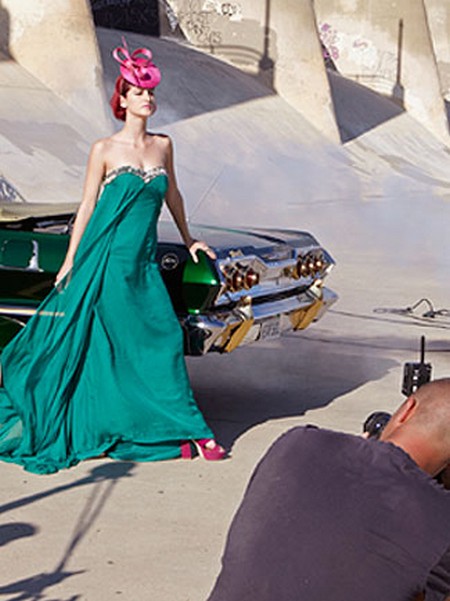 Tonight a new episode of the CW’s hit show America’s Next Top Model airs.  It is the third episode of the British Invasion and it is called ‘J. Alexander.’   Stand by as we live blog the show with all the up-to-the-minute results. I really hope tonight’s episode is better than last week I thought last week’s was silly.  The girls got a super power and capes bla blao….  There was a bunch of drama on last week’s episode too.  UK model Louise was not pleased last week – she has had a problem with the competition since when she did not want to cut her hair on makeover week.

Louise, 24, from London, England had problems with judge Kelly Cutrone – their personalities totally clashed.  I thought Kelly was really hard on Louise.  At panel Kelly started at Louise again and then Nigel told her she looked mean.  Louise had enough and she walked out and told everyone she wanted to go home.

Candane, Eboni, Ashley and Alisha were in the bottom and the judges decided to keep everyone because they can take criticism – clearly another crack at Louise.   What do you think was Louise out of line?  If you missed last week’s episode you can read our full recap here!

On tonight’s episode the American women start to break down while the British rally together. One of the women feels defeated and considers leaving the competition. At the challenge, the models are asked to create their own television commercial. During the photo shoot, the women model British couture hats while posing in vintage American cars. Kelly Cutrone and Nigel Barker join J. Alexander and Tyra Banks on the judges’ panel for elimination.

The girls get Tyra mail – can they translate their super powers into super sales?  The models head to meet J. Alexander and he introduces him to Martin Lindstrum.  He lets them know they have to create their own commercial.  The girls gets a product and then they have to sell it.  He lets the models know people judge you by your first impression.  The winning person gets three diamond bracelets from Ultra Diamonds.  Martin tells the girls the people judging the challenge is actual consumers and they will judge who wins.  The girls are shocked.

Martin plays the videos for the focus group and they are not being kind.   The one person they really like is Annaliese.  The other two they like is Kyle and Sophie.  Ms. J asks what they learned from the group.  Most of the girls were pissed off because they did not think Kyle did a good job but the consumers liked her because she looks like the girl next door.  The girls yell at Kyle and tell her she is not that good – Kyle gets upset and she runs out.  Ms. J follows her and Kyle tells Ms J she cannot stand some of the girls.

Martin tells the models three outshines the rest – Kyle, Sophie and Annaliese.   But the winner is UK’s Annaliese.

The girls get back to their apartment and thye have Tyra mail which says hold onto your hats you are in for a bumpy ride.

The girls head over for their photoshoot and Mr. Jay and Nigel Baker are there.  There photoshoot will be held at a Dam.  The girls are going to be modelling extravagant couture UK hats in American cars tricked out.

Nigel is the photographer today and most of the girls are doing really well.  However, Symone is struggling and Nigel gives her a lot of direction.

Kyle is packing her bags she is not sure she wants to stay.    Laura is pissed because so many people wanted to be on ANTM and Kyle got a space and she thinks she needs to appreciate that.

They ladies head to panel – Tonight J. Alexander will be on the judging panel.

Sophie – Nigel like what she did – she looks high fashion.  Kelly thinks it looks like  a maternity ad.

Eboni – her eyes are not looking right.  Tyra thinks she is trying to look sexy but she cannot do it.  Nigel thinks Eboni thinks she is gorgeous and this is the problem.

Katherine – Kelly thinks she does not look sexy.  Nigel thinks it is a good shot – Tyra likes the shot.

Symone – Nigel thinks it was frustrating to shoot her.  Tyra thinks the picture looks like she is at a parade.  Ms J is not sure she is comfortable in her own skin.  Tyra is disappointed.

Kyle – Kelly tells her she does not like what she looks like when she coms to panel.  Kyle loves the shot of her.  Tyra thinks the pictures is fantastic.  Nigel thinks she can look incredible.

Ashley – Nigel thinks she has charisma.

Candace – Nigel is disappointed in the picture.  Nigel does not think she has personality.

Laura – Nigel tells her it was a pleasure shooting her.  Kelly tells her she looks like a drunk May West.

Annaliese – Ms. J tells her she needs to look taller in shots.  Nigel likes her.  Kelly loves the shot.

Azmarie – Kelly loves her shot.  Tyra thinks it is amazing.

RUNNIER UP FOR BEST PHOTO – LAURA