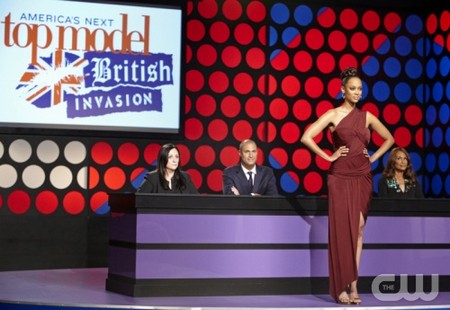 Tonight a new episode of the CW’s hit show America’s Next Top Model airs.  It is the fifth episode of the British Invasion and it is called ‘Beverly Johnson.’   Stand by as we live blog the show with all the up-to-the-minute results.  On last week’s episode Candace, 22, from Brooklyn, NY was sent home.

The judges were not pleased with her photoshoot and Nigel felt she had no personality and her passion and energy did not show.   Poor Candace tried for 7 cycles to get on the competition and she took the news hard.  She was upset because she really wanted to be there yet some of the girls had walked off the set and other had threatened to quit.  If you missed the episode you can read our full recap here!

On this week’s episode the models head to Toronto for fashion week where they have to go on castings to book modeling jobs. Some of the models get discouraged when they don’t book any runway shows. At the photo shoot, the women pose in foliage while being covered in maple syrup. Kelly Cutrone and Nigel Barker join guest judge Beverly Johnson and Tyra Banks on the judges’ panel for elimination.

We will be live blogging tonight’s episode with all the up-to-the-minute details. So come back at 9PM EST and spend the evening with us. Make sure to refresh often to get the latest updates!  While you wait for the recap you can catch a sneak peek of tonight’s episode here!

TONIGHT’S SHOW:   The girls comes in to the house to see Azmarie’s photo – she had best picture last week.  After Kyle wanting to go home last week she knows the girls are going to be mad at her because she decided to stay and someone was eliminated.

The British girls are excited because they have more experience on catwalk than the US models.   The girls meet Jay Manuel in the CNN tower.  He tells the girls they are going on casting for real shows.  The girl who books the most shows and does the best is going to win pieces from Jay’s collection and win the opportunity to fly back to Canada for a special event.  There are eight designers they can potentially book.

Symone is worried she won’t book a job and she will be going home.

Eboni and Sophie are tied they both booked 4 jobs.  Now it all depends on how they walk.  The person who does the best will win the challenge.  The first designer Pink Tartan cuts Kyle and Laura they just were not getting the walk.

Symone is in a bitchy mood because she did not book a job.  Mr. Jay comes over and talks to her and tries to encourage her.

The girls who walked thought it was amazing.  Annaliese is happy she felt amazing in her shows.  After the catwalk the ladies got to see the hotel they were staying at and they loved it.  They had a three floor penthouse.  Katherine tells Azmarie that she was amazing in the show.

The girls get Tyra mail that says ‘Stick and sweet and oh so delicious.’

Mr Jay – tells the girls Eboni and Sophie are tied and since they both did so well on the runway they are both winning.  The both win pieces from his collection.  They are also both winning an all expense paid trip to the Calgary Stampede.

The girls are now going to a photoshoot. The photographer for the day is Miguel Jacob and the girls are going to be covered in organic maple syrup.

Sophie does a really good job and Jay loves it.  Catherine has not booked any jobs and she knows she has to do a great job on this shoot. She is trying to model the hell out of it.  Laura does a great job and the photographer tells her she is beautiful.  Annaliese is posing really animalistic.  Ashley knows she has to get a great photo.  Kyle is trying not to let being cut from Pink Tartan get her down and she does a good job.  Azmarie does a great job.  Symone really nailed the photoshoot – Mr. Jay thinks her confidence is coming back. Eboni does the shoot but Tyra has told her she needs to do a cute shot but Eboni does not seem to be listening to Tyra and is still going for sexy!

Alicia – Kelly really wants her to model more – she feels she really has potential.  Alicia is not doing it for Kelly.  Beverly thinks the photo is safe.

Sophie – She booked 50% of go sees – Nigel loves her picture.  Beverly loves the photo it is high fashion.

Ashley – Kelly loves seeing her – but the shot is not enough. Beverly loves her face.  Tyra thinks there is a sadness in her eyes.

Annaliese – They love her body structure and the shot.  Nigel loves her bone structure.  But Nigel thinks she is a host.  Tyra thinks she booked shows because of how she speaks

Laura – She booked 1 show and then she got unbooked.  Her photo is stunning and beautiful.  Kelly loves her face but would like to see more energy.  Tyra thinks it is the most beautiful one Laura has taken.

Kyle – Beverly loves the photo and thinks her eyes are extraordinary.  Kelly thinks she is a mode.  Beverly thinks Kyle is a fashion model.  Nigel does not really care for the picture.

Symone – Nigel thinks it is the best beauty shot of all the photos.  Beverly thinks she really knows her body.  Kelly thinks it is beautiful – she loves the shot.

Eboni – she booked 4 out of 8 shots.  Nigel loves her photo – Kelly loves it.  Tyra thinks her photo is slamming.  Kelly thinks Eboni is hot.  Nigel thinks in person there is nothing special about her.

RUNNER UP FOR BEST PHOTO: AZMARIE