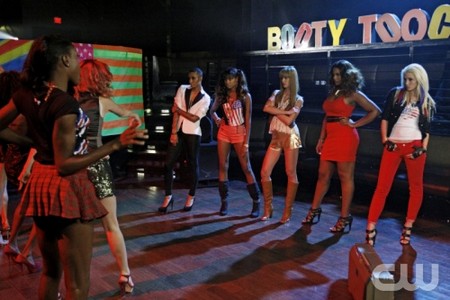 After a one week hiatus America’s Next Top Model returns tonight to the CW with a new episode.  It is the sixth episode of the British Invasion and it is called “Jessica Sutta and Nadine Coyle.”  On the last episode two week ago we said goodbye to UK team member Ashley, 22, from Armadale.  This put the competition 5 to 4 in favor of the American models.  If you missed the episode you can read our full recap here!

On this weeks episode the women make and record a music video – The women are mentored by “America’s Next Top Model All-Star” winner Lisa D’ Amato as they are divided into teams to create and record music videos. One model in particular has a tough time catching on to the choreography. At the video shoot, former Pussycat Doll Jessica Sutta and Girls Aloud singer Nadine Coyle are brought in to offer their expertise.

Kelly Cutrone and Nigel Barker join guest judges Jessica Sutta from Girls Aloud and Nadine Coyle from the Pussycat Dolls as well as Tyra Banks on the judges’ panel for elimination.  We will find out tonight who does girl groups better, the Brits or the Yanks?

We will be live blogging tonight’s episode with all the up-to-the-minute details. So come back at 9PM EST APRIL 11th, 2012 and spend the evening with us. Make sure to refresh often to get the latest updates!

Tonight’s Recap:  When the contestants get back to their room after panel there are gifts for the American team. Sophie takes Laura’s stuffed animal and puts it over the pool and says she’s going to drop it into the water she asked how mad Sophie will be.  Sophie tells her she would kill her. As Sophie is dangling was the stuffed animal (Alan) over the pool – Sophie grabs for it gets it but the ear came off and falls into the pool. As Laura grabs for it Kyle kicks the ear and it goes to the middle of the pool. Laura became very upset and freaks out the stuffed animal was given to her by a friend Kevin who passed away just before she came on the show. Sophie realizes that the stuffed animal meant something to Laura and says ‘what the hell have I done.’

The door rings and it is the last winner of America’s next top model Lisa. Lisa tells them they are going to record and perform a music video. She tells them this is super super fun and on the All-Star cycle of ANTM she was the one who won. The girls will be separated into two teams the US team and the UK team. The UK team will be mentored by Nadine Coyle and the US team will be mentored by Jessica Sutta. Lisa tells the girls that their music is on their virgin mobile phones and they should go and practice.

The girls walk into the recording studio. The UK girls picked the name Fiercely British and the US team picks the name the United Sirens of America. They will be recording with Tom Polce. Is a girl’s job to bring their own personalities to the songs. in the UK girls seem to be having an easier time at the music. After singing the songs Lisa tells the UK that she feels they are one point ahead of the American team but that doesn’t really mean anything.

The girls had over too Millenniums Studio to learn choreography. When they get there Tyra is there she is going to teach them the art of booty tooch. She tells the girls to put on their booty tooch equipment. Azmarie refuses to put the equipment on. She says she is a grown ass woman and she refuses to do it.

The American girls are practicing their choreography and Azmarie realizes what she did by refusing to participate in the booty tooch lessons. The girls go to the studio and meet Mr. J and they are in the Playhouse nightclub. It is going to be the backdrop for their video shoot.

The US team sees how much energy the UK team has the bar is really raised. Kyle is having a really hard time her eyes are opening really wise she really struggled with the choreography and her sense of belonging in the group. Mr. J thinks Kyle pulls down the performance for the girls this week.

Kyle is really upset she does not want to be eliminated for dancing poorly and knows it’s really important for her to get her energy up.  Mr. J thinks  Azmarie has great personality but she has to learn to keep her ego in check.  Laura feels Kyle’s self-consciousness has brought them down as a whole. Mr. J feels that Laura kind of steals the attention from the other girls when she’s performing with them.

Tyra mail tomorrow they are going to panel one girl will be eliminated.

Kyle is worried she knows she messed up and she is worried she will go home. Azmarie is also worried because she realizes not participating in the booty tooch could cause a problem for her team.

The UK girls think they won and really hope they do.

Nadine Coyle and Jessica Sutta are participating on panel tonight.

First up is the video by he US – United Sirens of America.  Simone – they thought she was beautiful and they love her body. Kelly loved Laura in the video she thought it was kind of nasty dirty punk.  Azmarie – Nigel saw a lack of commitment in the video by her. Kelly did not really get her voice. She did not own it. Tyra doesn’t understand why she refused to participate in the booty tooch.  Azmarie apologizes to Tyra for not participating. Ebony –  Nigel thinks she committed but she committed too much.  Kelly does not like the way Ebony came off. Kyle – Nigel felt she could’ve just chilled out a bit. They felt she was a little disconnected. They would like to see her push a little more.

The UK team video Fiercely British – Tyra loved their music video- she thought she was watching a real music video. First up is Kathryn. Kelly thought that her performance was really cool and sexy. Sophie they think she looks like a bombshell from head to toe. Kelly loved her and that she thinks it was her favorite performance of the day.  Tyra thinks she really committed to it.  Alisha –  they think she looked really professional.  Annaliese – they thought she did a really great job and she was adorable. They see a sweetness about her. Kelly loved her in the video.

Now it is time for the judges to deliberate.

Tyra tells the rest of the judges that they have amazing talented girls.

the judges felt that the UK girls have the best overall video.

In  the bottom Kyle and Azmarie

Kyle stays in the competition

Azmarie is a eliminated. Tyra thought she was going to be a finalists she thought she might have won. Tyra tells her it is more than having the personality – she has to commit, be there, be hungry. She needs to learn to cooperate.