Anderson Cooper Twitter War While Reporting The News From Gaza 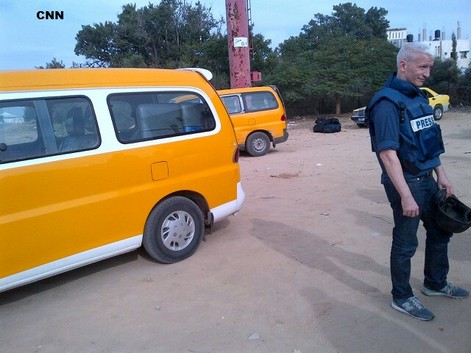 Anderson Cooper is a master of controversy. His short-lived talk show had so many moments of self-indulgent tabloid fodder, that viewers turned away in droves and forced the television program to cancel itself due to low viewership numbers. However, Cooper is not just a tabloid talk show host; he is also a prolific television journalist for CNN.  Cooper is currently reporting on the ongoing Middle East conflict from Gaza, but that’s not the only war he is involved in.

Cooper’s Twitter account was recently lambasted by critics of the journalist. Pamela Weiss, Twitter handle @Pamela_Weiss, asked Cooper on Twitter, “Report a fair story. Report facts. Why not talk about the rockets being fired FROM Gaza?” He replied to this tweet, “Ummm…. I just did that and have been doing that repeatedly on Twitter and on TV. Do you actually think before you tweet? Perhaps spend less time tweeting about coconut flan and more time actually following the news.”

Another unbridled fan going by the twitter handle of @Rabbi_Sykes wrote, “May just stop watching #CNN. Now @andersoncooper almost apologized for #Hamas dragging a dead ‘Spy’ for #Israel & yelling God is great! Oy!” To which Cooper responded, “@Rabbi_Sykes excuse me, but how am I apologizing for Hamas by reporting them dragging a body through the streets? That is deeply offensive.”

Then, a shockingly unabashed critic attacked Cooper’s sexuality by tweeting, “Didn’t Cooper admit he was gay, if so let’s let the Palestinians know and see what happens.” Cooper hit back, “Wow, tough words from an anon Internet troll. Why not use your name and photo, coward? Have some more Frito’s and keep typing.”

We’re fans of Anderson Cooper here at Celeb Dirty Laundry. We know what criticism is like when “reporting” the news, so from us to you, Anderson, touché mate! Don’t stop serving up the bitch juice!

What do you think? Do you think Anderson should focus on reporting the news and rather leave Twitter alone? Are people upset because they view Anderson’s choosing to report from Gaza as a political statement?  Is Anderson getting flack because people perceive a pro-Palestinian/anti-Israel bias in CNN’s reporting of the deadly conflict? Let us know your thoughts in the comments below.