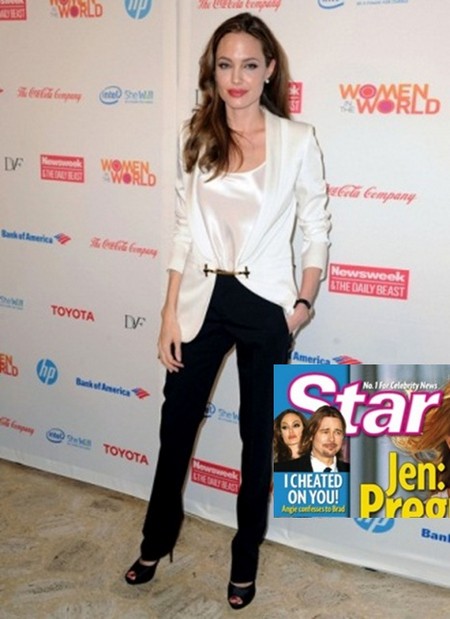 Brad Pitt has reacted with shock and rage as Angelina Jolie has admitted to her partner that she cheated on him repeatedly with one of her ex-lovers.  To make matters even worse, Angelina confessed that she still gets together with her ex-lover whenever his is town.  Brad has reacted by threatening to end their relationship while Angelina is pleading for him to reconsider for their children’s sake.

Angelina made this horrid confession to Brad recently and was crushed when he responded that if it wasn’t for their kids, he’d be long gone!  The secret source added:  “Angie has secretly been plagued with that fear for nearly two years — but to actually hear Brad say it cut her to pieces.”

Brad was made even more irate by the fact that Angelina has always gone ballistic at the mere mention of Jenifer Aniston’s name!  Talk about a double standard…

This amazing piece of news is covered in Star Magazine which also reveals:  Jennifer Aniston is Finally Pregnant and Marrying Justin Theroux (Photo)

Hollywood Life reports on the Star cover story:  In late March, Brad, 48, spent a week in France overseeing work on the couple’s mansion, while Angelina, 36, stayed back in L.A. with their children. During their time apart, a source tells Star that “Angelina had been doing some soul-searching lately about her life and their relationship, and while Brad was away, she decided that letting go of all her secrets would be the healthiest thing she could do.”

The couple had a heart-to-heart in their kitchen when Brad returned from his trip, but Angie’s honesty led to a full-fledged blowout. “Angie admitted that in 2005, during the first year she and Brad were together after he left his wife, Jennifer Aniston, she was also having a relationship behind Brad’s back with one of her ex-lovers,” reveals a source. “It may have gone further than she intended at that time because they shared such a deep emotional connection.”

What’s worse — Angie admitted that she still gets together with the ex whenever they’re both in L.A. “Brad was stunned — and he felt deceived,” explained the source. While Angie has always prided herself on remaining friends with her exes, including actors Jonny Lee Miller and Billy Bob Thornton, the source claimed she’d always “hit the roof if Brad ever so much as mentioned Jen, let alone got together with her.”

Will Brad and Angelina make it through this crisis?  Who is the ex-lover that Angelina fooled around with behind Brads back?  What do you think?  Let us know in the comments below.