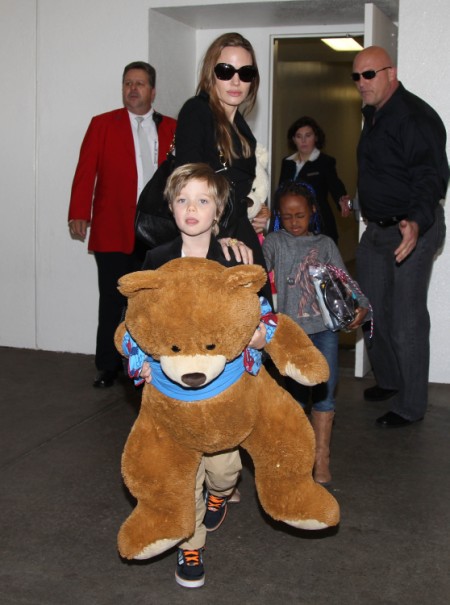 Angelina Jolie and Jane Pitt’s tumultuous relationship isn’t having the best week because the two are at each other’s throats again but this time it’s over princesses, not politics. Angelina is annoyed that Jane keeps buying Shiloh Jolie-Pitt girly, frilly outfits when Angelina knows her daughter prefers to dress like her brothers.

It’s not disrespectful! Jane’s a grandma. They can do whatever they want! If she wants to buy Shiloh make-up and My Little Ponies for the rest of her life then she should be able to do that. You just smile, accept them, throw them in the trash after she’s gone and move on. I think the women just have issues with each other so the slightest annoyance turns into a Chernobyl-type disaster. Angelina’s probably still p-ssy about the anti-Obama letter Jane wrote that high-lighted her distaste for same-sex marriages.

That’s one thing that kind of grosses me out about this story though. Clearly, the world thinks Jane Pitt is some bigot now. I might not agree with the woman’s politics, but she’s a private citizen and I don’t know her, so I’m not going there. But the logical conclusion for the tabloids to make was that homophobic Jane doesn’t agree with Shiloh’s preference to dress like a boy wanting the reader to infer that Shiloh is going the way of Chazz Bono. Am I wrong in thinking that’s what this article is really about? Is it really reading, “Jane Pitt is worried that her granddaughter is displaying lesbian tendencies and chooses not to play along like Angelina” or “Jane Pitt thinks she can gift the gay out of her granddaughter with princess dresses?”

Am I reading too much into this? Is this just another Brad Pitt’s family hates Angelina Jolie story or is six-year-old Shiloh’s sexuality really under fire?