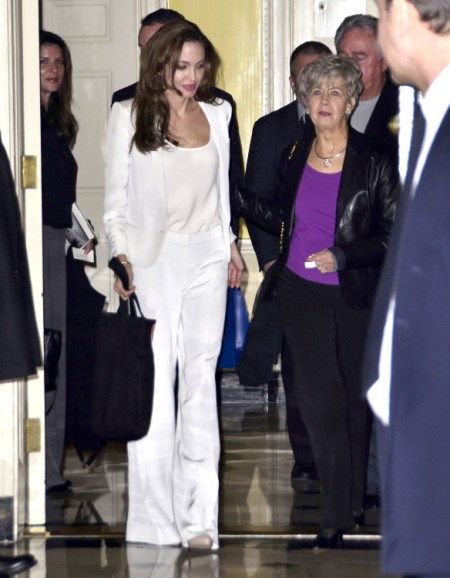 Angelina Jolie is fighting mad at her future mother-in-law, Jane Pitt, over the letter of support Jane penned to her local paper for Republican presidential candidate Mitt Romney.

In it Jane revealed she does not support President Barack Obama’s leftist, far out ideas of abortion or same-sex marriage. This is a blatant difference of opinion from the vocal Angelina and Brad who have said they would not get married until everyone in the country had the rights to do the same.

Apparently, for Angelina, not everyone should have the right of freedom of speech, so in her frustration with Jane, she has decided to educated her.

According to Female First magazine, a source told Star magazine, “Jane has never wanted to talk politics with Angelina. She knew it would cause greater issues for them, and she wanted to try to have a relationship with the mother of her grandkids. She never thought her letter would be such a big deal.… Angelina has told Brad he must educate his mother, but Brad is too much of a mama’s boy. If Brad won’t do it, Angelina will have to take matters into her own hands and talk to Jane about how, as the mother of such a prominent celebrity, she shouldn’t be writing letters that clash with her son’s personal opinions. It’ll inevitably end up in a huge blowout, with Brad stuck in the middle. Brad keeps telling her not to take this so seriously, but when Angie sets her mind on something, there’s no talking her out of it.”

OK, so it’s not like Angelina’s going to sit her down and say, “Listen up Granny. You’re old and your ideas are ignorant. Shut it!” The article says she basically just wants her to cool the letters to the editor since they come back to bite Brad and Angie in the ass. However, should Angie be the one telling Jane that? I have a strict theory that in-laws should try to keep things as peaceful as possible at all times. If Brad and Angie have a problem with Jane’s happy typing fingers then Brad or his brother should be the ones to talk to her about it – not Angie. Brad knows how to deal with his mother, and if he thinks Angie shouldn’t take the situation so seriously, then I figure he knows what he’s talking about. But I also gather Brad doesn’t like confrontation – especially in the family. It’s been well documented that Jane and Angie had a shaky start because Jane was floored when Brad left Jennifer Aniston. A smack down over politics definitely won’t help matters.

Do you think Angelina should stay out of the Pitt family drama or is she right to stand up for her convictions even it means she may alienate herself from the family even more?