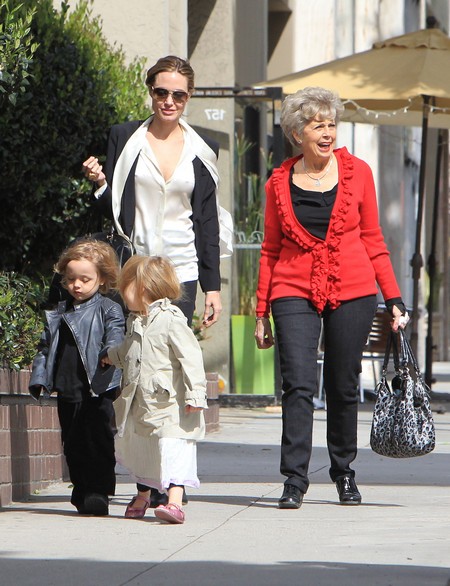 Brad Pitt and his mother, Jane Pitt, are on opposite ends of the American political spectrum. While Brad is a social liberal who openly supports Barack Obama, his mom and brother, Doug Pitt, are staunch conservatives who back Mitt Romney. Hopefully the Pitts don’t talk politics over Thanksgiving dinner. As far as Angelina Jolie – she seems to avoid expressing political affiliations.  Angelina’s focus is on human rights as her appointment as special envoy to the UNHCR indicates.

There is nothing terribly surprising about the ideological differences between Brad and the rest of the family.  Brad was raised in an old-fashioned religious Christian conservative home and then wound up in Hollywood – a bastion of left-leaning liberal sentiment.  So he changed from the point of view with which he was raised to the prevailing one in Hollywood.  Brad and George Clooney are supposedly best of pals, so we assume Brad has internalized the new creed and that his politics are genuine – as George is also a big Obama supporter.

From THR: Jane Pitt calls the president “a liberal who supports the killing of unborn babies and same-sex marriage” just months after her son reveals his support of Obama in a THR cover story.

An anti-gay letter urging Christians to vote for Mitt Romney that was printed today in The Springfield News-Leader has been confirmed by the newspaper as having been penned by Jane Pitt, mother of Brad Pitt.

The verification comes amid some confusion, as the Missouri newspaper first printed an editor’s note denying any relation between the letter writer and movie star. That was later replaced with a second editor’s note, reading, “To clear up earlier confusion, the News-Leader has verified the letter writer is the mother of actor Brad Pitt and local businessman Doug Pitt.”

The letter — itself a response to another opinion piece in the newspaper justifying Christians’ rights to refuse to vote for Romney because he is a Mormon — identifies Mrs. Pitt as “a Christian [who differs] with the Mormon religion.”

But, Pitt continues,“any Christian should spend much time in prayer before refusing to vote for a family man with high morals, business experience, who is against abortion, and shares Christian conviction concerning homosexuality just because he is a Mormon.”

Pitt goes on to write that “any Christian who does not vote or writes in a name is casting a vote for Romney’s opponent, Barack Hussein Obama — a man who sat in Jeremiah Wright’s church for years, did not hold a public ceremony to mark the National Day of Prayer, and is a liberal who supports the killing of unborn babies and same-sex marriage.”

We generally don’t cover politics on CDL – but after all, this is Brad Pitt’s mom!