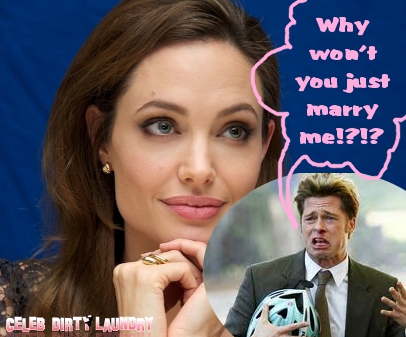 Angelina Jolie and Brad Pitt finally got engaged in the spring after being together for nearly eight years . . . and Angelina is already putting their wedding plans, which most likely would’ve involved a summer ceremony, on hold so she can focus on work.  The couple was supposedly planning on marrying in France at their incredibly glamorous chateau, where Brad would plan the nuptials (and Angelina would probably just have to show up). It’s no surprise Angelina places work above, well, soul-matery.

Despite their “couple” status, Angelina continues to do whatever the heck she wants, including leaving Brad Pitt to attend his red carpet premiers all by his lil’ lonesome self. Just a few days ago, when Brad took to the carpet to premier his new film Killing them Softly at Cannes, he was left to fend for himself and didn’t have anyone to hold his hand. Who knows what beautiful Angelina was off doing . . . probably trying to overthrow The Kardashians and officially take over the world once and for all.

Right now Brad and Angie are living in London, where Angie is finishing up her work on Disney’s new film Maleficent. Reportedly, Brad is not very happy that his wife has agreed to take on so many projects (she, allegedly, has two more in the works), as they have an agreement that only one of them will work at a time. One might think that Brad is fed up with his wife because he wants more time to act, wants more time in the spotlight to practice his art, but that’s simply not the case. The poor dude just wants to get married!

A source tells Dailymail UK that “Brad isn’t happy that Angelina has taken on all this work as it has scuppered plans for a summer wedding. He is taking on less work to be with the children and Ang’s father, Jon Voight, is also flying to the UK to help out.”

We all know that Angelina is an incredibly free spirit and likes to do whatever the hell she wants, but maybe it’s time she bites the bullet and marries Brad. How much longer will these wedding plans last on ice before they become freezer burned and irreplaceable?