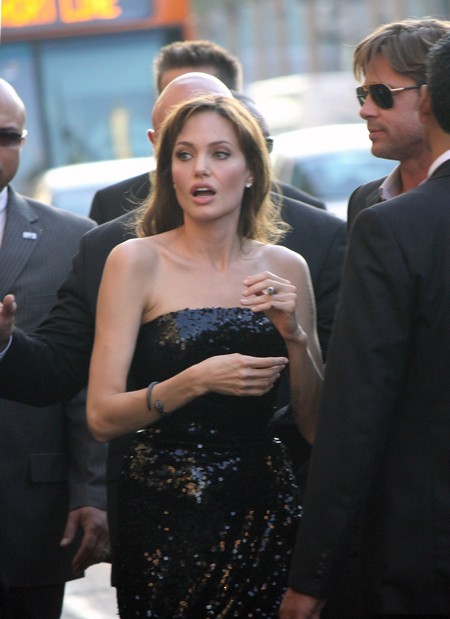 Some say that Brad Pitt’s intention to work with ex-wife Jennifer Aniston on upcoming film projects is a spiteful response to Angelina Jolie’s rekindled relationship with ex-husband, Billy Bob Thornton.  After all what’s good for the goose is good for the gander.  Angelina has been widely reported to have written a gushing introduction to Billy Bob’s new book – The Billy Bob Tapes: A Cave Full Of Ghosts and this has made Brad furious.

Angelina has always made her positive feelings for her former husband very clear and in the intro to his book “she says that he’s a genius and that they’ll always be close,” according to a friend.    Brad has strongly disapproved of Angelina associating with Billy Bob and contributing to his memoir – but with her typical stridency Angelina has told Brad that she will do as she pleases.  As we have reported here at Celeb Dirty Laundry, Angelina has made Brad cry with jealousy over her refusal to stay away from Billy Bob

But as In Touch exclusively reveals two can play at Angelina’s game – and Brad is now in talks to work on a project with his own ex, Jennifer Aniston!  Brad is seeking revenge on Angelina for her recent flirtations with Billy Bob and working with Jen will certainly achieve that goal.

Jennifer has been in contact with Brad’s production team, Plan B Entertainment, about starring in an upcoming film entitled The Normal Heart.  Angelina has never allowed Brad to have any contact with Jen after she stole him while Jen and Brad were still married.  This potential affiliation between Brad and Jen will be unbearable for jealous Angelina.

Brad is in talks to work on a project with his own ex – Jennifer Aniston.  “Jen has been in touch with Brad’s production team, Plan B Entertainment, about starring in an upcoming film called The Normal Heart,” the source reveals of the former couple, who owned the company together before their 2005 split.

Tired of playing the “funny girl,” Jen has her eye on the developing flick, a drama about gay activism.  “Jen knows that Brad can help her get more dramatic roles,” the source adds.

Knowing that Angelina who has never approved of even a cordial relationship between her partner and the wife he left her for – would hit the roof, Brad is “hesitant to give Jen the role because it would make Angelina feel threatened,” the source says, “But he really wants to help her.”

But Brad just may be ready to sign a contract with Jen – ensuring months ahead of working side-by-side – when he reads Billy Bob’s book, which the wild actor claims will chronicle “his heartbreaking brief marriage to fellow Oscar winner Angelina Jolie.” Though Brad knows all too well about the famous tales of kinky sex and vials of blood around each other’s necks, he may still be surprised when he comes across some of the shocking details.

“Angelina used to do a lot of drugs while married to Billy Bob,” the friend says, adding “And her ex-husband will tell the world everything about it.”

Could this collaboration between Jen and Brad signal the end of his relationship with Angelina? A source claims about Angelina that “she still loves Billy Bob and doesn’t care what Brad thinks or says but Brad has finally had enough.”  Who could blame Brad for being upset with Angelina’s flirting and her double standard of behavior?

Is it time Brad treated Angelina the way she treats him?  Why shouldn’t he work with Jennifer – especially since Angelina continues to work with Billy Bob?  What do you think?  Let us know in the comments below.

It could be the final straw for the couple, who were already crumbling under the weight of Angelina’s jealousy and insecurity.