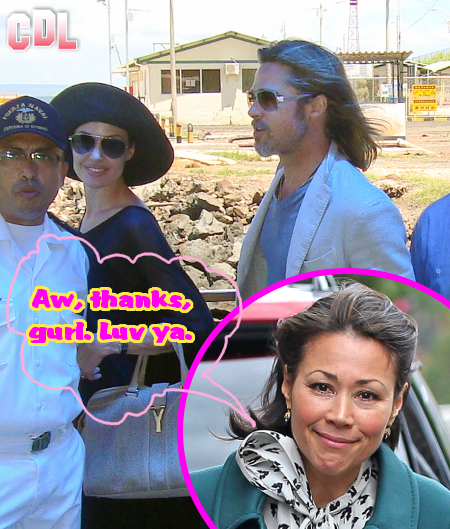 Angelina Jolie flaunts her celebrity powers once again, and this time she’s using them to help support journalist Ann Curry, who was recently sacked from her role on the popular TODAY Show. In the days following her being fired from the program, Angelina reached out to Ann and told her that if NBC wants any interviews with either Brad Pitt or her in the future that she has to be the one to do it. No exceptions.

“Angelina reached out to Ann Curry after she was fired from her gig on the TODAY show and was very clear, if ANY news program from NBC wants an interview with her, or Brad, Ann will be the only one to do it,” a source told Radar Online.

The source continues: “Angelina has tremendous respect for Ann because of the work she has done on bringing awareness to Darfur. Ann has developed a professional relationship with Angelina and Brad, and they trust her implicitly because of her integrity. Their working relationship has developed into a friendship, and it meant the world to Ann that Angelina had reached out to her. Angelina made it clear to Ann that no one from the current TODAY show cast would get an interview with Angelina or Brad, and with rumors of an upcoming wedding for the couple, NBC will lose any interviews with the actors in the future if Ann isn’t allowed to do it.”

Whoah, sounds like NBC has angered two of the world’s most powerful celebrities. All I can say is that NBC better grant permissions to Curry if they want their interviews — and, honestly, what station doesn’t want Brangelina’s interviews? Angelina doesn’t have a publicist so she makes her own rules when it comes to interviews. Angelina Jolie, and we will put it quite simply, does what she wants.

I’m actually kind of liking Angelina’s recent move here. Sure, it’s slightly bitchy, but sometimes you just have to pull out the claws in Hollywood. And at least Angie is pulling out her claws to help a friend. Right?