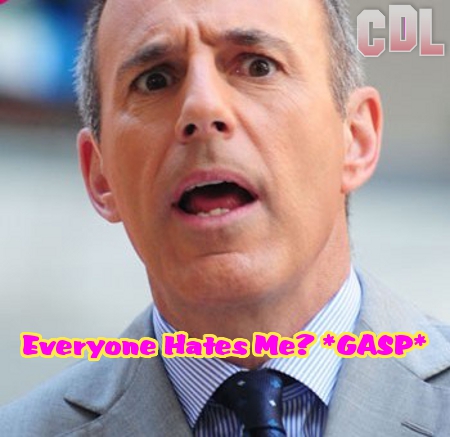 When Matt Lauer negotiated his most recent contract with The Today Show, it included a clause that allowed him to have a say in who sat beside him as co-anchor of the once top rated morning show. He pushed NBC executives to fire Ann Curry, blaming her for the ratings drop and the head honchos obliged, replacing Curry with Savannah Guthrie. Well, guess what, the ratings are still in the toilet and now the staff is furious with Matt for pushing well-loved Ann out the door in the first place!

The National Enquirer reports: “There are several producers that have been with the TODAY Show for a very long time, over ten years, and Matt Lauer is now hated by them because they feel that he is responsible for Ann Curry’s being fired.  Ann was tremendously popular with the producers, cameramen, and other staffers of the show because she truly is a team player. Ann was all about the news, and breaking stories, just a true pro.”

“Ann had been part of the TODAY show for over 15 years, and her send off was just horribly executed,” the magazine continues. “It’s not lost on anyone that GMA beat the TODAY show on Wednesday in the ratings yet again. Viewers have had enough and the show just isn’t staying relevant. Morale is extremely low and something is going to need to change very quickly before they can get the TODAY show back in first place for good.”

Even super friendly, always happy weatherman Al Roker appeared to take a dig at Matt on-air last week!  When speaking to an Olympic rower Matt commented on her being thrown in the water after winning and Al quipped, “The tradition here in New York is you throw her in the Hudson River.” Roker cheekily quipped: “Which is different to our tradition here which is to throw one of us under the bus! But that’s a different story…”

It’s painfully clear that there is a lot of tension on the set. Savannah Guthrie is a good regular addition but just isn’t making people want to tune in.  Would you like to see Ann come back, as unlikely as it is?  Maybe Matt is actually the problem.  If he is the source of the tension then maybe someone else should be seated in his spot instead!  What do you think of the Today Show drama?  Tell us in the comments below!