Angelina Jolie Says She Is No Sleeping Beauty 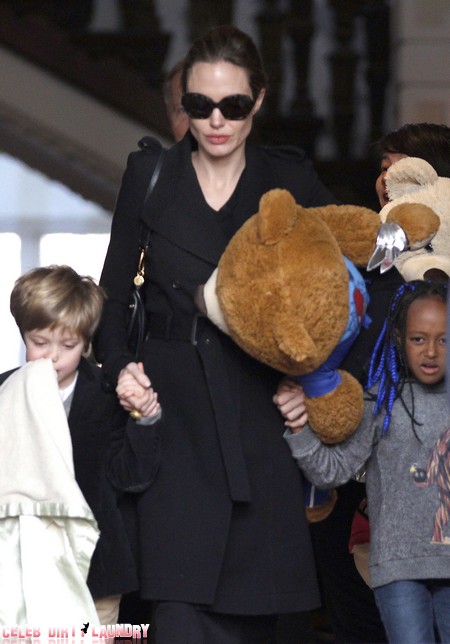 Angelina Jolie is no sleeping beauty and looks forward to playing the anti-hero in the movie adaptation of the classic fairytale, Sleeping Beauty.  In an interview with Entertainment Weekly Angelina revealed that she shares many traits with the evil Maleficent – and Jennifer Aniston would be the first to agree!

Angelina says that Maleficent is great person and a role model for young girls.  We can be certain that the leg-thrusting celeb’s view of the world is not one that most people share.   Of course Angelina lives in a world of her own.  One not fettered with the constraints that most of us face.

From the Entertainment Weekly interview Friday:   “It’s a really great script. I’m having a lot of fun. I’ve already got my horns fitted.  My kids are very happy.  It’s not anti-princess, but it’s the first time that they’re looking at this epic woman [in a different way],” she says of the new take on the fairy-tale classic.”

“You see a woman capable of being many things; just because she protects herself and is aggressive, it doesn’t mean she can’t have other [warmer] qualities.   You have to figure out the puzzle of what she is.”

Jolie says there are redeeming qualities to her character, despite her ruthlessness. It sounds really crazy to say that there will be something that’s good for young girls in this, because it sounds like you’re saying they should be a villain.”

“[Maleficent] is actually a great person. But she’s not perfect. She’s far from perfect.”

“We’re experimenting with different things,” Jolie says. “But the horns are the horns – you can’t deny them. You have to have horns.”

Angelina Jolie is an actress – she gets paid to act, not to think… and that is a good thing for her and for the rest of us.

Is Angelina truly an intellectual lightweight or does she just come across as one?  What do you think?  Let us know in the comments below.