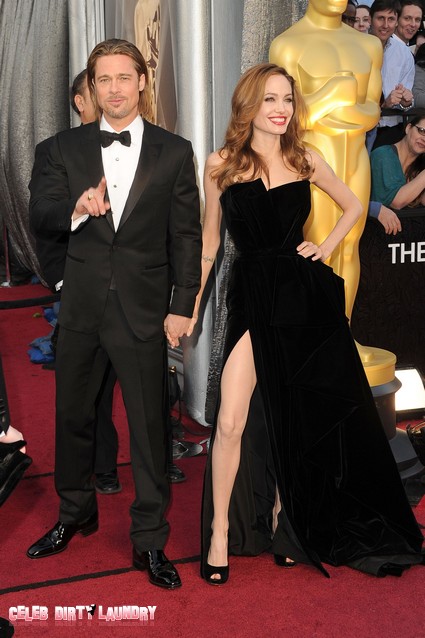 Angelina Jolie likes to pretend that she is better than the rest of us and claims she is unaware of the craze she started with her awkward Oscar leg thrust.  Of course when Angelina grabbed Brad Pitt right out from under (over?) Jennifer Aniston we go to see just how classy she is (NOT).   In any case, Ms. Jolie told the HuffPo that she didn’t pay attention to the furor surrounding her silly ostentatious leg pose.

Angelina says ‘the people she surrounds herself with don’t really talk about that kind of stuff.’  No of course not – Angelina lives in a rarefied atmosphere with other superior human beings…

TMZ reports: Even though her Oscar night pose spawned its own photo trend and even its own Twitter handle … Angelina Jolie says she didn’t pay any mind to the craze known as “Jolieing.”

The woman with the most famous right leg in Hollywood tells the Huffington Post she ignored all the press following her red carpet appearance.

She told HuffPo, “I honestly didn’t pay attention to it. You know what I mean? I don’t watch those TV shows and if I go online and see something about myself, I don’t click on it. And the people I surround myself with don’t really talk about that kind of stuff … I heard something, but I didn’t pay any attention.”

More people bought tickets to “The Tourist” than believed her story.

Angelina Jolie is a disgusting snob who plays at being a humanitarian – humanitarians don’t live in multi-million dollar castles in France…  Her acting talents are limited, at best, and she stole her creative work, In The Land Of Blood And Honey.’

SEE: Angelina Jolie Ripped Off Plot For Her Movie In The Land Of Blood And Honey

Jolie is much ado about nothing.   What do you think?  Is Angelina Jolie better than the rest of us?  Let us know in the comments below.