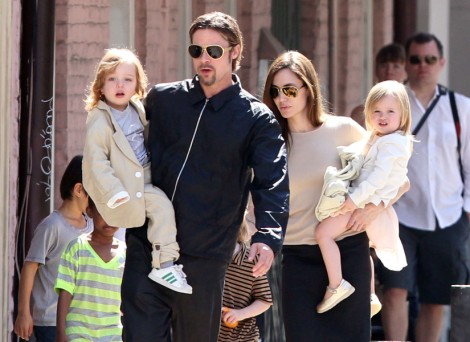 Brad Pitt and Angelina Jolie have been quiet lately. Have they been hiding out in embarrassment? 2012 hasn’t been the best year for the Brangelina Brand. The couple rang in the year as a punching bag and left it the same way. Who could forget the leg at the Oscars? Angelina’s nonsensical posing is still being talked about close to a year later because it was so staggering to watch her try SO HARD. Angelina’s not supposed to try to get us to look at her. We’re supposed to be drawn to her like moths to a flame. And then came the movie problems. Brad Pitt’s World War Z continues to be haunted with re-shoots and collaboration issues (however I’m still excited to check it out because I want to know how badly they stray from the book which was incredible). Then Killing Them Softly bombed quite loudly and I don’t even have to mention the Chanel ads, do I? I still can’t get over what he was thinking as he was sputtering out all those Dr. Seuss-like nothings.

But what about all the charity, you say? What about the goodwill stuff? Oh, they’re still there and admirable, but in a year full of missteps, they remain unnoticed in comparison. Goodwill just doesn’t sell – not like a Brad Pitt/Angelina Jolie sex tape story. The National Enquirer has an oldie but a goodie out this week reporting that Brad Pitt’s buying the $10 million sex tape because he knows if it gets out it will damage his children and his partner’s new Mother Teresa persona. Apparently there are images floating around involving self-mutilation. Well, that’s not a stretch, is it? Angelina has already said she was into that stuff when she was younger and who out there believes Angelina would NOT have a sex tape during her wilder times?

It’s a silly story but maybe it’s for the best for Angie and Brad. We need a little dirty action from them. That’s when we love them the most! Jennifer Aniston’s boobs are hanging out all over Mexico right now preparing for a wedding. Angelina and Brad need to strike back with a sex tape. It might restore some sort of balance to the universe and prove yet again that Angelina and Brad don’t care what we think. Because, if they do, then they are just another pair of actors with self-esteem issues and who wants that?