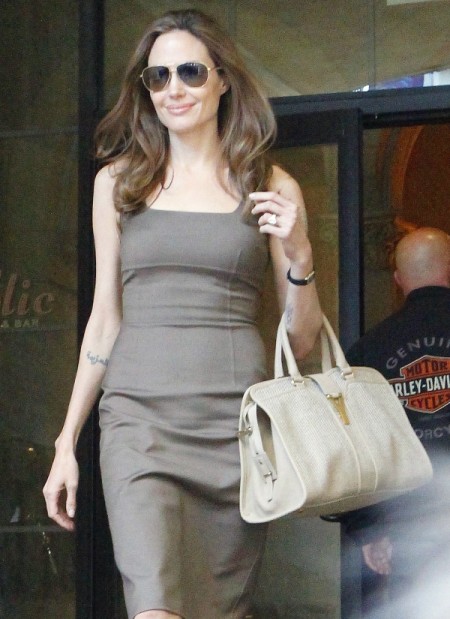 Did you really think Angelina Jolie was going to stay quiet while newly engaged Jennifer Aniston got her happy on again? Well… she probably did but that’s not what Star magazine’s reporting! Apparently in the Jolie-Pitt household, Angie can’t keep her trap shut about Jen’s engagement and is taking her jealous hate out on her mother-in-law. Poor Jane Pitt. She must have a panic attack every time she visits her grandkids. But she should have dropped Jen just as fast as Brad did!

“Since Angie can’t say anything straight to Jen’s face, Jane is the next best thing,” an insider told Star. “After Jane offhandedly mentioned how thrilled she was for Jen, Angie said, ‘Please! She’s pathetic! But, hey, it’s about time. Sure hope it lasts, but don’t get your hopes up. Justin’s going to dump Jen. Then Angie made some snide comments about how she’d believe it when she saw it, in regards to Jen’s wedding — making it clear that she thinks Jen is a pathetic, neurotic mess.”

God bless the tabloids. They won’t stop until Jennifer and Angelina throw on some white T-shirts and pull each other’s hair out in a mud wrestling pit. So let’s have some gossip buffet and pick and choose what we want to believe out of this. I bet Angie can be b-tch sometimes to Brad Pitt’s mom. Politically, they have issues and it’s got to be awkward knowing your mother-in-law was upset when your man ditched his ex-wife for you. But that was like eight years ago! I’m sure Jane’s over it by now! The engagement and soccer team of kids had to have softened the blow.

And do you think Angie rips on Jen? I like to think she’s above it but I also like to think I’m above a lot of things that I’m not so I wouldn’t put it past her. Who among you hasn’t looked up your husband’s ex-girlfriends or spouses on facebook? Don’t bullsh-t a bullsh-tter. We’ve all done it. It’s fun. It’s silly. It’s harmless. It’s natural. I bet Angie does have an interest. But did she say the nasty, c-nty things that Star alleges? Probably not. Remember, Jen is happy and content, therefore Angelina has to be angry and bitter and insecure about Brad going back to her. For some reason this balances the world.

But… if Angelina did say those things, do you think she had a point? Do you see Jen actually going through with the marriage?