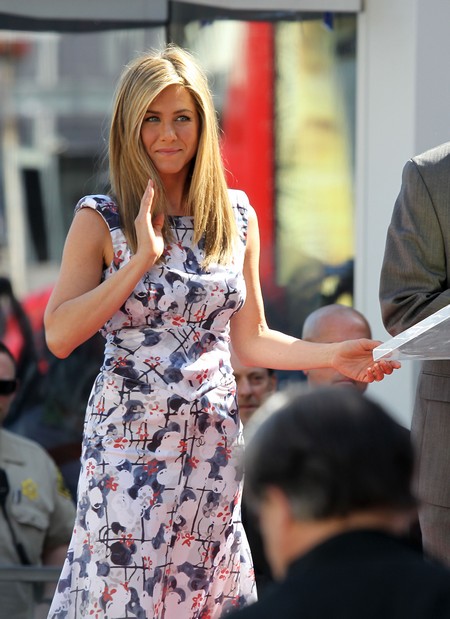 A devastated Jennifer Aniston literally collapsed on the ground in tears when she found out that Brad Pitt proposed to her hated rival, Angelina Jolie.  Brad was decent enough to call Jen and let her know that he had proposed to Angelina and that she had accepted before the public announcement.  Although Brad wanted to spare Jen’s feelings the news broke her heart instead – reminding her of how Brad had heartlessly cheated with Angelina and abandoned her.

The Nation Enquirer Print Edition, April 30th reports:  Jennifer Aniston collapsed when Brad Pitt called her to break the news that he is marrying Angelina Jolie, sources say.   “Brad called Jen the first week of April to tip her off about the engagement,” revealed the source close to the 43-year-old “Friends” star.  Brad said, “I wanted you to hear it first for me. I asked Angelina to marry me and she said yes.”

“The news hit her like a ton of bricks. Jen never actually believe that Brad would actually marry Angie.

”Even though she was in a state of shock, she didn’t want to let Brad know how heartbroken she was. But as soon as they got off the phone, Jen burst into tears and collapsed! She just sank to the ground in a heap.”

The Emmy-winning beauty met Brad a blind date set up by their agents in May 1998 the two tied the knot in a star-studded million-dollar extravaganza at an Oceanside estate in Malibu on July 29, 2000.

They were Hollywood’s ultimate golden couple until Brad, 48 and Angelina flipped for each other while filming the action thriller” Mr. and Mrs. Smith.” Jen filed for divorce in March 2005, and the split was finalized several months later.

So it looks as though all the PR hype we heard about Jen being ‘so happy’ for Angelina was just a crock.  Jen might have been happy if Angelina fell off the face of the Earth but she was not happy to learn that the woman who stole the man who was her husband would now be marrying him.  Let us know what you think in the poll.