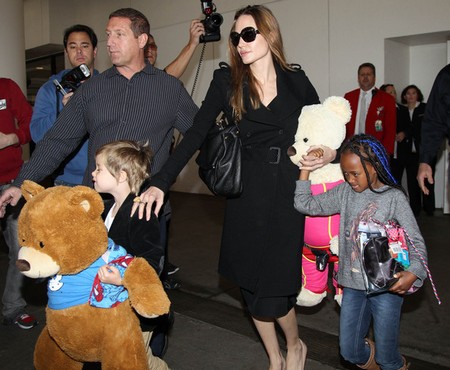 Angelina Jolie is struggling to overcome her apparent anorexia and reportedly wants to put on 10 pounds before her wedding this summer.  Angelina’s problem is not biological – she has no physical disease that prevents her from gaining weight.  Her problem according to Brad Pitt is that she just won’t eat.

Since Brad and Angelina made their engagement public on April 13 all speculation points to a summer wedding in France for the happy couple.  But Angelina is very sensitive to media buzz and she has been picking up on all the recent talk that she is ‘too skinny’ and possibly anorexic.  With every available paparazzo camera expected to be on her and her A-list wedding guests when she makes her marriage vows to Brad, Angelina wants to look healthy.

So the couple have asked their good pal and celebrity chef Jamie Oliver to help fatten her up.

The Daily Star reports: “Angelina has decided she’d like a more shapely figure when she weds Brad and is hoping to gain ten pounds. Brad and Ange have asked Jamie to suggest some recipe ideas for them.”

“Ange never cooks so Brad’s now knocking up some English dishes like shepherd’s pie and sausage and mash.  Brad would love her to have curves like she did when they met on ‘Mr and Mrs Smith’ in 2004.”

“Jamie has been to Brad and Ange’s home numerous times. They have a similar sense of humour and are all down to earth.”

Sounds like a brilliant plan – Brad in the kitchen cooking and Angelina chowing down traditional plebeian British food… ya right!  As if Angelina Jolie is going to be sitting down to a plate of bangers and mash.  What do you think?  Do you see Angelina getting over herself and eating normally?  Let us know in the comments below.