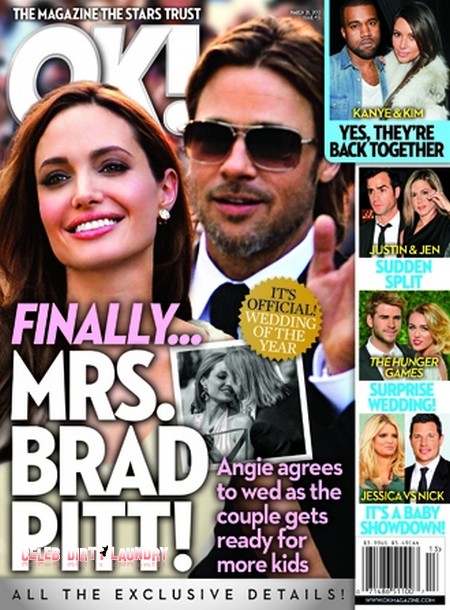 The March 26th, 2012 issue of OK! Magazine features the cover story ‘Finally…Mrs. Brad Pitt.’  The magazine claims they have the exclusive details on Angelina Jolie and Brad Pitt’s wedding of the year .    Apparently after six years together with Brad, Angelina has finally agree to get married as the they get ready for more children.

Do we believe OK!? Well two week’s ago they covered the same story claiming that with twin boys on the way, Brad Pitt And Angelina Jolie were done ‘teasing’ about their wedding and were  actually making plans!

OK! has more details: “They had an amazing time Oscar weekend,” says a confidante, who adds, “since then, they’ve been madly in love.”   On March 3, it was a happy domestic scene once again as the pair of A-listers were spotted in L.A. while going through a McDonald’s drive-through with their kids. Brad, 48, who was driving, paid and passed lunch to a smiling Angelina, 36, to distribute to the kids seated in the rear of their vehicle. It’s a good sign that they’re going through with the nuptials.

“The wedding was totally off: They were having so many arguments, but they’ve finally managed to bury their differences,” explains the confidante, adding, “Angie is expecting twins this fall, so it is making them feel a time crunch. They decided they’d both like to welcome their twin boys to the world as man and wife, which means the wedding has to happen fairly soon. They’ve both realized how much they want to be together.”

Although rumors of a Brangelina wedding have plagued the famous couple ever since they first got together in 2005, insiders insist that, this time, it’s really happening.  Brad and Angelina have insisted that they wouldn’t get hitched until gay marriage became legal throughout the U.S. (which is still quite a ways off,) the magazine claims they have given in to their children’s demands.

What do you think is Angelina pregnant again with twins?  Is a marriage imminent for Angelina and Brad.  Sound out in the comments below and let us know your thoughts!