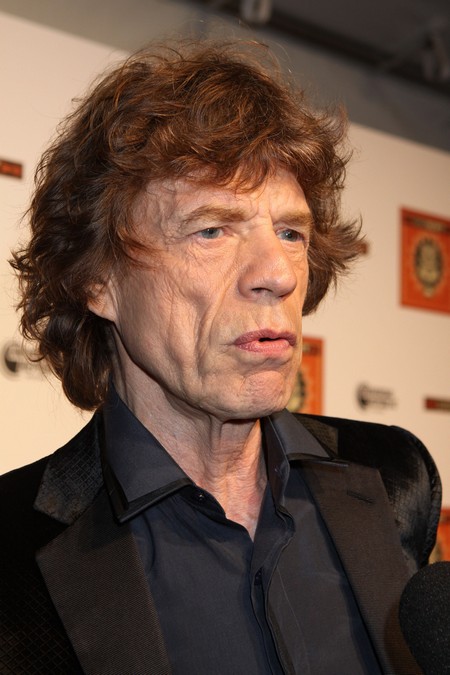 It sounds like a hybrid of a Rolling Stones’ song and Pulp Fiction, but the truth about the relationship between Angelina Jolie and Mick Jagger is just plain weird anyway you present it. Angelina Jolie, mother of 6 and currently Special Envoy of United Nations High Commissioner for Refugees, António Guterres, was a self-confessed cutter and heroin addict when Mick Jagger fell in love with her.  And get this – it was Angie’s mom, Marcheline Bertrand, who was trying to pimp out her own daughter to Mick!  What mother wouldn’t want their daughter hooked up with the lead singer of The Rolling Stones?

Their affair seemed to consist primarily of Mick chasing the much younger Angie while Marche attempted to convince her daughter not to resist.  We hear that Angie and Mick became acquainted when she played the part of a stripper on the 1997 Rolling Stone video, ‘Anybody Seen My Baby.’ It wasn’t a particularly good period for Angie…

We learn all this and more in the ‘MICK: The Wild Life and Mad Genius of Jagger,’ the biography by Christopher Andersen.  The New York Daily News has excerpts that expose Mick’s ‘two-year infatuation with future superstar actress Angelina Jolie.’

ANGELINA JOLIE made it perfectly clear to everyone that she didn’t want to be playing the part of a stripper in a Rolling Stones video. “I can’t f—— sing, and I can’t f—— dance!” she said, tossing an angry look at the director. “What the f— am I doing here?”

The daughter of Academy Award-winning actor Jon Voight had just finished portraying doomed model Gia Carangi in a television film of the same name, and the part had left her physically and emotionally drained — and, like Gia, who died of AIDS at just age twenty-six, addicted to heroin.

“Marche loved Mick for Angie,” said Marcheline’s friend Lauren Taines. “She felt that he could teach her about fame and how to handle it.”

Angelina was high-strung, foul-mouthed, and given to dark moods and fits of tempers. She used hard drugs. She had a fondness for tattoos, piercings, and S&M (“It’s a weird cleansing of self”). She was a self-confessed “cutter” — someone whose self-esteem was so low that she coped by making small cuts in her arms and legs.

Eventually she did accept an invitation to spend time with Mick in Palm Beach, Florida, during a break in the ‘Bridges to Babylon’ tour that fall. The weekend left Angelina unimpressed and Mick wanting more.

What to make of all this?  Well Mick Jagger is the quintessential rock star – thousands of women have found their way into his arms and bed – groupies, celebs, housewives – you name it and it wanted to sleep with Mick.  He could practically assume the droit du seigneur – of course most of his mates would not have been virgins.  And then along comes Angie…

Angelina was a wild one – I mean a real wild child in just about every sense of the word – only thing you couldn’t get her to do was take the sun – her complexion, her skin tone –after all she IS Angelina Jolie! But Angie didn’t NEED Mick Jagger – Angie doesn’t need anyone… except Brad Pitt (and her plastic surgeon of course).  Angelina truly seems to be a different person under the apparently calming influence of good old Brad.

Quite the baggage package was Ms. Jolie – heroin addict – serial cheater – self-harming cutter – wow!  This girl was no Jennifer Aniston (sorry, just couldn’t resist). And yet now we see an amazing metamorphosis – a movie director and producer, A-list actress, UN envoy, mother of 6 in a stable relationship, engaged to Brad (just about the nicest guy in Hollywood) – it is hard to believe.  What is the truth about Angelina – who is really inside that woman?  If you know, please tell us in the comments below.