Angelina Jolie Worried Marriage To Brad Pitt Will Be A Disaster 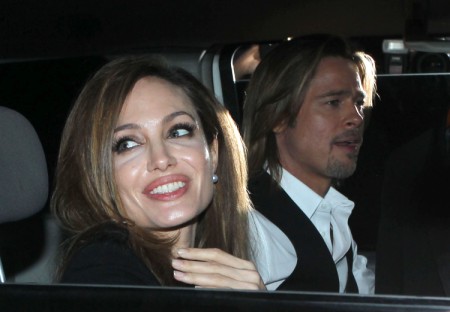 Angelina Jolie’s so worried that her marriage to Brad Pitt will end in disaster she’s consulting with Buddhist monks in an effort to find the perfect date for their wedding. The twice divorced actress first got interested in Buddhist astrology when she realized her previous marriages to Jonny Lee Miller and Billy Bob Thornton were doomed from the start according to the Buddhist calendar. The National Enquirer reports she’s working with the Wat Khmer Buddhist temple in Los Angeles to make sure she doesn’t make the same mistake with the father of her six children.

Though this will be the first time Angelina has looked to the stars to find a wedding date, this isn’t the first time she’s consulted them for other important markers in her life. “Angie has used Buddhist astrology in the past to help her pick the best, more auspicious days, for important moments in her life,” a source told the Enquirer. “She’s relied on the Buddhist calender to plan medical procedures and vacations for herself, Brad and the kids. She’s even used it for picking the dates of her movie openings.”

Brad drew attention a few weeks ago when he said they didn’t have a date planned for their upcoming wedding but just got engaged because it seemed like the logical thing to do. It didn’t stop him from some bachelor party celebrations though. However, that nonchalant answer was the result of Angelina’s continual date-searching. “Angie is convinced the date of their union will guarantee their future happiness…. Brad just goes with the flow,” added the insider. “He told Angie to take as much time as she needs. After 8 years and six kids together, they clearly aren’t rushing into marriage.”

Does this seem like an Angelina thing to do? This is weird to me. I’ve always gotten the impression that Angelina didn’t give a shit about how her movies performed. She’s too busy saving the world to care about movie openings. The self-proclaimed “bad girl” is known for wearing vials of blood and having sex with her mother’s boyfriends, but Buddhist astrology… I’m not so sure. There is a lot on the line with this marriage though, I’m sure she doesn’t want to screw it up but I never pegged her for an astrology girl. You know a lot of powerful women in history consulted in the stars? Queen Elizabeth I and Princess Diana in addition to perfectly grounded celebrities like Shirley MacLaine and Sylvester Stallone’s mother, Jackie. It just seems a little too romantic for Jolie. But it is kind of sweet at the same time. And Brad just cracks me up about it. He’s such a Midwestern boy. I could see her freaking out about something and he’d just lean back on the couch, crack open a beer and say, “Whatever you want, babe.” THAT is truly the recipe for a great marriage much more than lucky dates.

What do you think about this story? Do you think magic numbers can help Angelina Jolie make her third time the charm?