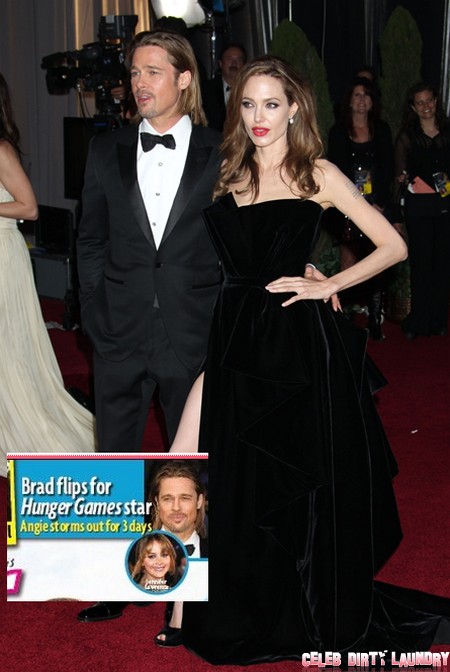 Angelina Jolie is in a jealous rage as the man she is supposed to marry this Summer, Brad Pitt, has fallen for The Hunger Games’ Jennifer Lawrence.  Supposedly Brad and Jennifer exchanged phone numbers at the Academy Awards and the two are now texting regularly.  Needless to say Angelina’s famous jealous streak has come to the fore and she ‘absolutely freaked out!’ Can you just imagine – another Jennifer – and this one is not on the way out but on the way in…

Brad is so smitten with Jennifer that he is ‘determined to find a project to collaborate on’.  Will this project relate to film or perhaps to something a little more intimate?  Angelina is tearing her hair out and ‘demanded that he cut off all contact with Jennifer.’  Angelina upped the stakes as ‘she jetted off in a huff to Amsterdam on a humanitarian mission, dumping Brad for three days.’

To cap off her display of jealousy ‘she even forbade him from attending the March 12 L.A premiere of The Hunger Games.’  Rather hypocritical of Angelina – she made Brad cry with jealous rage as she cavorted with her ex-husband, Billy Bob Thornton in Europe.  Of course now Angelina may learn what it’s like to have her man stolen – and by a Jennifer!  Sort of like divine justice for her stealing Brad form Jennifer Aniston.

Hollywood Rag reports from Star mag: According to Star magazine, Brad Pitt has been texting Hunger Games actress Jennifer Lawrence and it has partner Angelina Jolie livid! Apparently Brad and Jennifer exchanged digits earlier in the year at the Academy Awards. The source said: “Brad hasn’t stopped talking how gorgeous, poised, and talented Jennifer is. He was already a huge fan of her work in the 2010 film Winter’s Bone, which earned her a Best Actress Oscar nomination. And once he saw an advance screening of The Hunger Games, he just flipped.” He’s “determined to find a project to collaborate on” with Lawrence through his Plan B entertainment company.

BUT Angie “warned him to act his age and stop drooling over a girl young enough to be his daughter. She even hit him with the jab, ‘Which Jennifer are you talking about’ – a reference to his ex-wife, Jennifer Aniston – when he wouldn’t stop gushing.” And when Angelina discovered Brad texting she “absolutely freaked out! Even though it was totally innocent on Brad’s part, she demanded that he cut off all contact with Jennifer, and then she jetted off in a huff to Amsterdam on a humanitarian mission, dumping Brad for three days. She even forbade him from attending the March 12 L.A premiere of The Hunger Games.”

Do you think that Brad and Angelina are for life?  Could Brad leave Angelina for a much younger hot star?  Let us know in the comments below.