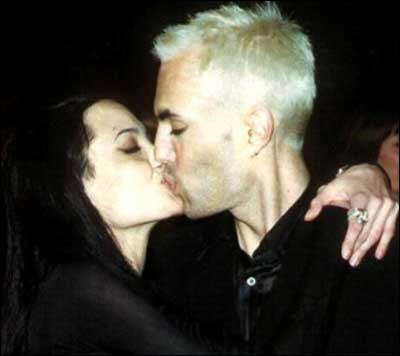 Angelina Jolie has always appeared to be very close to her brother James Haven.  Sometimes a little too close- like at the 2000 Oscars when she very passionately kissed James in front of the masses. What ensued was a hailstorm of controversy as the two laughed off the notion of having an incestuous relationship.

According to the latest issue of GLOBE, Angie has picked James to serve as Maid-of-Honor when she ties the knot with Brad Pitt. According to Shelby Loosch,

“Angie has always related to men better than women and James was thrilled to accept his little sister’s offer. They’re extremely close and share a very special bond.”

It does make sense that she’d want James to stand beside her although I honestly would have expected him to be the one actually walking her down the aisle since we know her relationship with her father is minimal at best. I’m sure James is thrilled to be involved in absolutely anything that makes Angie happy, so here’s the real question – will she really get married again?

Do you see her really becoming the next Mrs. Brad Pitt?  I just can’t envision it ever happening. I also have a hard time believing that Brad really wants to spend the rest of his life country hopping with Angie. These two are together on paper because so many kids are now involved. Brad will marry her before he walks away from her, for the kids’ sake. But I doubt that is truly what he actually wants. What do you think, will James ever serve as that Maid-of-Honor? Tell us your thoughts in the comments below!