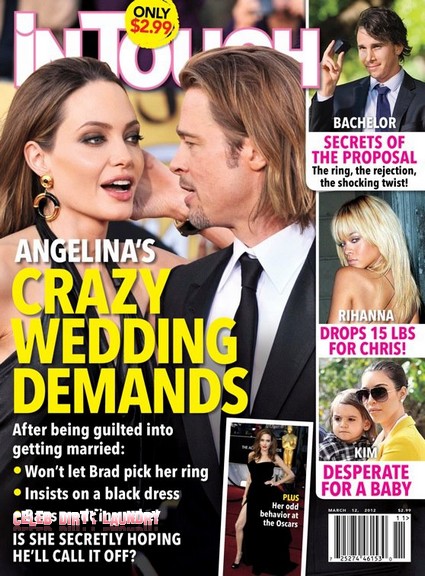 The March 12th, 2012 issue of In Touch  features the cover story ‘Angelina’s Crazy Wedding Demands.’  The  magazine claims that Angelina Jolie has been guilted into getting married to Brad.   Brad Pitt recently revealed that after seven years and a house full of children they will tie the knot sooner rather than later.  It seems getting married is important to their children and they have been pressuring Brad and Angie to take the next step.

Now that Angelina feels pressured she is making crazy demands and acting up or so the magazine claims.  She won’t let Brad pick her ring and she wants to wear a gasp… black wedding dress.  She also bans a wedding cake.  The magazine speculates on whether Angelina is secretly hoping that Brad will call the wedding off because of all her demands.  They go to claim they they have the scoop on her odd behavior at the Oscars.

What they are alluding to is the ANGIEleggate at the Oscars.  When Angelina appeared on stage to present the Best Adapted Screenplay award at the Oscars?  Not only did we pretty much see all her lady bits when she strutted across stage, but upon stopping at the podium she paused and extended her leg out in a very robotic way leaving us to stare at nothing but her exposed leg.

So there you have the story, what do you think are Angelina and Jolie finally headed to the alter?  Is Angelina trying to sabotage the big plans?  Hit the comments below and let us know what you think!

Also included in this week’s issue the magazine has the scoop on how Kim Kardashian is desperate for a baby.  She sees her sister pregnant for the second time and she is green with envy.

To find out all this and more pick up the current issue of In Touch.