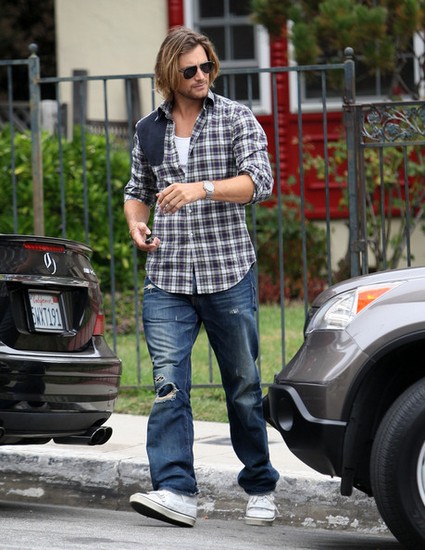 Looks Gabriel Aubry is going to be taught how to control his temper whether he likes it or not. Gabriel and his baby mama, Halle Berry, met with representatives of the Los Angeles County Department of Children and Family Services on Friday as part of the investigation into recent complaints against Gabriel, including child endangerment.

The 36-year-old model is currently being investigated for battery and child endangerment after he got into a verbal altercation with his daughter Nahla’s nanny, Alliance Kamden, before allegedly shoving her into a wall while she was holding child. The child services reps apparently heard enough to cause them to recommend that Gabriel take anger management courses, which sources say he agreed to enroll in. A law enforcement source connected to the case told TMZ: “Gabriel has a little bit of a temper, but the good news is that he realises it.”

Gabriel’s compliance with the recommendation to take classes is no doubt designed to improve his chances in court Monday when Halle goes for full custody of their child – again. Gabriel and Halle appeared in a Los Angeles courtroom on Tuesday where she asked the judge to remove Gabriel’s joint custody of Nahla until the accusations of endangerment had been investigated by the Los Angeles Department of Children and Family Services.

Halle got nothing out of that hearing as no changes were made to the existing custody agreement.

The former couple are due in court again on Monday. The judge will then decide the custody arrangements for Nahla in light of the recommendations of Children and Family Services based upon the Friday meeting. Given Friday’s determination that Gabriel has an anger management problem his custody of Nahla might be jeopardized.

There’s also a criminal investigation focusing on child endangerment and battery but it looks good for Gabriel. TMZ says:

law enforcement sources tell them they are confident Gabriel will NOT be prosecuted because it’s a “he said she said” case. The matter will be referred to the L.A. City Attorney next week but it’s expected the Office will decline to prosecute.

One thing we can count on – Gabriel won’t be working with Alliance Kamden any longer.