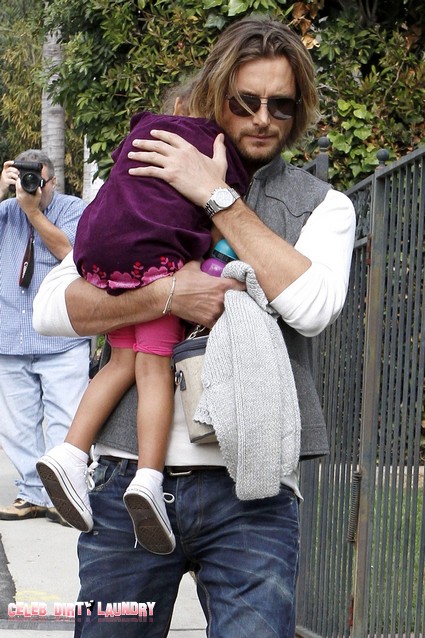 What a douche! Halle Berry’s ex. and the father of her 3-year-old daughter Nahla, Gabriel Aubry has landed himself in legal hot water again. The 36-year-old model is being investigated for battery and child endangerment after he got into a verbal altercation with his daughter’s nanny before allegedly shoving her into a wall while she was holding Nahla.

TMZ is reporting that Aubry did not inform the nanny that he was going to be keeping Nahla home from school on Wednesday, apparently due to illness, and she went to school to pick up the 3-year-old who was not there. The nanny then claims she went to Aubry’s house and was angry that she was not informed about the illness. Things got heated when Aubry began to hurl insults at the woman in front of his daughter, allegedly saying: “You’re the f****** nanny. Who do you think you are? You are a nobody. You don’t need to f****** know anything.” The nanny then claims she picked up Nahla to remove her from the volatile situation at which point Aubry shoved her into the wall.

Aubry will appear at a special hearing tomorrow in a Los Angeles court. Berry is reportedly flying in to attend.

The circumstances of Berry and Aubry’s bitter custody battle made headlines in October when Aubry was ordered to have the Nanny present during his visitation with his daughter. There have been rumours that Aubry was verbally abusive to the 45-year-old actress in the past, specifically that he used racial slurs against her and possibly his daughter.