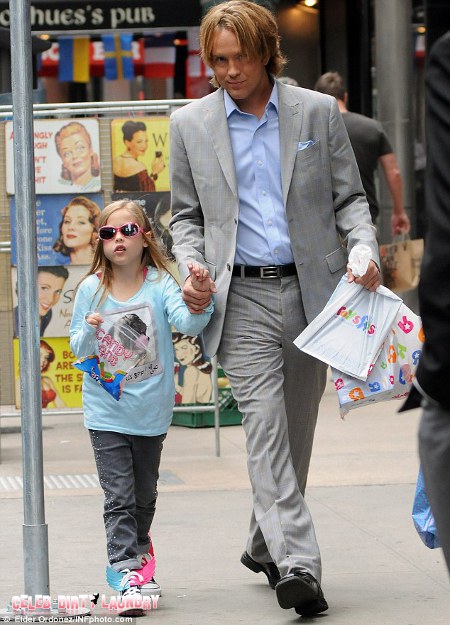 It was only a matter of time before little Dannielynn, Anna Nicole Smith’s daughter, would be big enough to start asking the hard questions about her mother’s death. Seems as if that time has come. The five year old recently visited the Bahamas with her father, Larry Birkhead, where her mother and half-brother, Daniel Smith, are both buried.

“She said, ‘Why did mommy die? And I said, ‘You know, they, doctors couldn’t fix her. But if you’re good … you’ll get to see her someday.'” said Birkhead on an interview that aired today on Good Morning America.

If you remember, he had to take a DNA test to prove his paternity in order to be able to raise Dannielynn himself. He says he had no idea how difficult it would be to raise a child himself, but he tries to keep things as normal and balanced for his daughter as he can.

“I enjoy every day and every day is an adventure,” he said. “You wish you had a couple more hours in each day. She is as well-adjusted as she can be. I hope that she understands that no one’s perfect and people have triumphs and people have tragedies. And her mom really … soldiered on and she came from nothing and she, you know, lived her dream. But I also want to make things a cautionary tale … and give her the tools that she needs to where she has the opportunities that her mother and Anna’s son, Daniel, you know, won’t have.”

Birkhead has taken a bit of heat over the years, but he seems to have genuinely tried to raise his daughter in the best way that he knows how and that includes making sure that Dannielynn still is as connected as her mother as possible.

“I want to keep Anna’s image alive in a positive way. She could light up a room. And now her daughter’s taken her place and she’s lighting up every room that she goes into, trust me,” he said with a laugh. “I feel it every day.”

Do you think Birkhead is a good father and, if so, do you think money has motivated him? Do you think it’s possible for Dannielynn to grow up and follow a different path than her mother and step-brother, or is she predestined to struggle? Let us know your thoughts in the comments below!