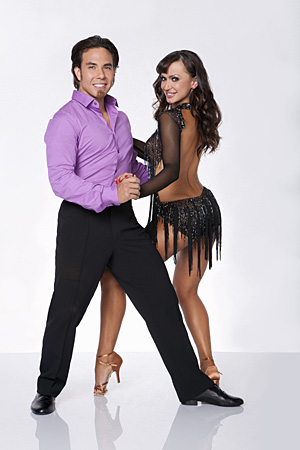 Apolo Anton Ohno danced the Cha-Cha-Cha  to “Party Rock Anthem” by LMFAO for his first performance of Dancing With The Stars All-Stars 2012 Season 15.  All 13 couples will hit the stage performing either the Cha-Cha-Cha or the Foxtrot to impress the judges and viewers at home, hoping they’re not the first couple sent home.   We recapped the tonight’s show for you and if you want to see how all the couples did go HERE!

Apolo Anton Ohno and professional dancer Karina Smirnoff dancing the Cha Cha Cha.  Joey had this to say about dancing this week, “Week one is the foxtrot so it is time for me to channel my inner Fred Astaire and Gene Kelly and try to bring home a second mirror-ball trophy! (My first one has been super glued back together more times than I’d like to admit.)”

Judges Comments:  Len: “It was not a gold medal performance, maybe a bronze medal.  It need a little more hip performance.  But you came out and sold it”  Bruno: “You completed the task.  The side extensions of your arms were absolutely exquisite.  That looked great!”  Carrie Ann: “Is it just me or did you just get 3000 times more sexy.  Your hip action threw me over the desk.  Great hip action, wow!”

Watch the video below and let us know what you think? Do you think Apolo did enough to win the Mirror Ball Trophy? Sound out in the comments below!