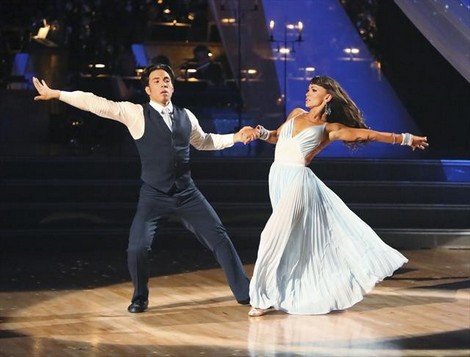 Apolo Anton Ohno danced a Cha Cha/Paso Doble Fusion, on Dancing with the Stars: All-Stars performance show tonight.  He danced his Cha Cha/Paso Doble to “Scream” by Usher.  All the the seven remaining couples will performed a fusion dance that was chosen by their competitors on last week’s show. If you missed the show, we recapped tonight’s show for you and if you want to see how all the couples did go HERE!

Judges’ Comments: Len: “I tell you what it is like, is looking in the mirror when I look at your body.  There was nothing safe about that performance, Apolo Ohno, oh ya!”  Bruno: “Like a wolf with plenty of power.  You should be in Twilight.  Cha-Cha-Cha clean.  Paso doble triumphant!”  Carrie Ann: “It is amazing to see you are still pushing himself.  But the dance I loved the approach.  It was hot It started off strong and ended strong.”

Watch the video below and let us know what you think? Do you think Apolo did enough to avoid elimination next week? Sound out in the comments below!