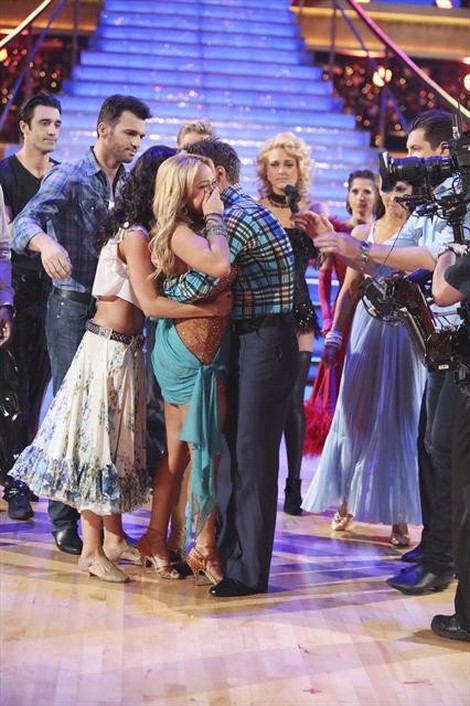 Tonight on ABC DANCING WITH THE STARS ALL-STARS, the seven remaining couples face a fusion routine to try to outlast one another as they compete in this season’s dance marathon.   The remaining couple will face no elimination this week.

Tonight’s episode is going to have all the usual glitz and glam in the ballroom, which you won’t want to miss. So be sure to tune in for our live coverage of ABC’s Dancing With The Stars All-Stars Week 7 Performance Show – tonight at 8PM EST! While you wait for our recap, hit the comments and let us know what you thought of last week’s episode of Dancing With The Stars All-Stars.

Tonight’s recap: Tonight we will get to see the most grueling dance marathon ever.  We will also get to see 2 dances morphed into one on tonight’s DWTS.  The pros are starting the show showing us how dances can be fused together.

Len: “I tell you what it is like, is looking in the mirror when I look at your body.  There was nothing safe about that performance, Apolo Ohno, oh ya!”

Bruno: “Like a wolf with plenty of power.  You should be in Twilight.  Cha-Cha-Cha clean.  Paso doble triumphant!”

Carrie Ann: “It is amazing to see you are still pushing himself.  But the dance I loved the approach.  It was hot It started off strong and ended strong.”

Emmitt Smith and partner Cheryl Burke will dance the Rumba/Samba

Len: “I wore pink because I thought if you got injured I could take over.  Glad I did not, I don’t think I could do as well as that.”

Bruno: “Emmitt, ever ready and always on it.  That was a smooth and balanced blend.  I loved how you went into it and out of it.  You did it with such ease and it was extremely difficult.  Wonderful job!.”

Carrie Ann: “I agree with Bruno, what was challenging was the way you went back and forth.  What was lacking was your upper body.  In middle it got a bit messed up.”

Kirstie Alley and partner Maksim Chmerkovskiy will dance the Quickstep/Samba

Len: “I thought it was a nice mix the Quickstep had go and the Samba was so so, admirable effort, well done!”

Bruno: “Technique apart, whatever you do is always good.  That was brilliant, only you can change Cinderella into a stripper.  The quick step was good but you lost it in the Samba.  Always great to watch you!”

Carrie Ann: “You know what this is hard because you are so pure and so wonderful.  But, you lost yourself in that second half of that dance.  The Quickstep was nice, but Samba fell apart.”

Len: “I am happy because you captured the smoothness of the Foxtrot with the cripmess of the Cha Cha.  There was a little incident.  But lovely!”

Bruno: “Oh my darling your booty was working all the time.  Nice time you maintained the two dances through out.  Your timing was good, your control was good.  Great improvement!”

Carrie Ann: “It was how you recovered that was amazing  That was an difficult routine.  IT was sexy and overall beautiful!”

Len: “The tango and the cha-cha-cha were beautifully done.  I loved the way it went together.  Good job!”

Bruno: “The dance mistress of Tango into a sexalicious cha-cha-cha.  I thought Beyonce came out, you were on fire.  You never been sexier”

Carrie Ann: “I have to say, last week you were not giving it all, tonight you are a star.  I loved the transition.  It was great!”

Len: “That was a firecracker, I’m telling you I can’t vote tomorrow but I am voting for you.”

Bruno: “Shawn the Queen of the night.  There were two dances and they were danced to the purity.  All the time you could tell which one was the Paso and which the Tango.  Perfect!”

Carrie Ann: “If there is a picture what a dance fusion, that was it.  So seamless, the dance was perfect.”

Gilles Marini and partner Peta Murgatroyd will dance the Tango/Samba

Len: “You were nipping around South America, brought out a perfect tango and a fantastic samba!”

Bruno: ” That is how we do it the South America way.  Great presence, perfect command, I salute you!”

Carrie Ann: “You have to be careful, I still see those arm thingys that are happening.  I did think it was a fanatics fusion!”

Len comments: “It was survival of the fittest and Melissa and Tony kept the energy going from beginning to the end.”

That is it until next week!  Next week will be a double elimination and then we are moving into the semi-finals!