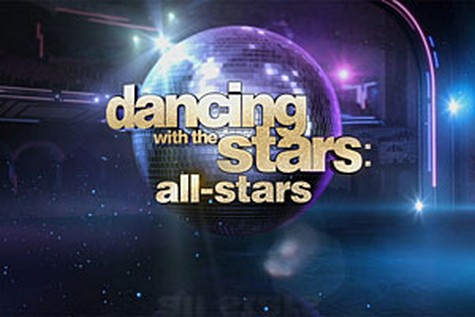 Tonight on ABC – Put on your cowboy wear… It’s Country night on DANCING WITH THE STARS ALL-STARS.  Our 8 remaining couples once again take to the ballroom on Dancing With The Stars All-Stars as we see the sixth performance show of the season.  On tonight’s show the remaining couples perform to some of country music’s biggest hits.  Did you watch last week’s performance show?  We did and we recapped it here for you!

Tonight each couple will be performing to a Country hit song where the celebrity will be required to perform a solo during his or her routine. Three-time CMA Award-nominated group Little Big Town will rock the stage, performing their smash hit, “Pontoon,” accompanied by The Troupe. The remaining eight couples will perform together in a Freestyle Group Dance. Accompanying the Group Dance, Country legends Big & Rich, along with Cowboy Troy, will perform a medley of “Save a Horse (Ride a Cowboy)” and “I Play Chicken with the Train,” two of the show’s most exciting freestyle songs from previous seasons. This is the first time the show’s Group Dance will be accompanied by musical guests.

On tomorrow night’s result show multi-platinum recording artist and six-time Grammy(r) winner Taylor Swift will perform her mega hit single, “We Are Never Ever Getting Back Together,” from her new blockbuster album, “Red.” In addition Grammy-winning singer and songwriter Jason Mraz will hit the stage to perform his chart topping hit single, “I Won’t Give Up,” from his latest album, “Love is a Four Letter Word.”

Tonight’s episode is going to have all the usual glitz and glam in the ballroom, which you won’t want to miss. So be sure to tune in for our live coverage of ABC’s Dancing With The Stars All-Stars Week 6 Performance Show – tonight at 8PM EST!  While you wait for our recap, hit the comments and let us know what you thought of last week’s  episode of Dancing With The Stars All-Stars.

Tonight’s recap:  Tonight’s show opens with with a number and a dance by the DWTS dance troupe.

Len: “Gilles what I love about you is you come out and give 100%, there are no half measures.  Well done!  That is what I want to see!”

Bruno: “I don’t know what that country was but I want to pay a visit, you sold.  It was sexy and full on.  Your solo you did so much, you are a performer.  The foot work was not as clear as it could have been, but the performance was magnificence!”

Carrie Ann: “It was so creative, so sexy.  It was so appropriate for both of you.  You need to watch your hands, t-rex hands.  Get rid of the t-rex hands and you are on your way!”

Len:  “I loved the fact that the music was soft and quiet, wonderful choreography it was fantastic!”

Bruno:  “It was wonderful a sequence of intriguing shapes, absolute stunning, always it had an emotional threat through it.  Your solo was magic.  A fantastic job.”

Carrie Ann:  “I have been looking for vulnerability from you from day one, it was breath taking, I had chills.  It was just what I wanted”

Len:  “A little bit hectic, but you kept it under control.  You came out and attacked and you kept it going.”

Bruno:  “The introduction was seductive, you did it, you are back in the game big time.  What a comeback.”

Carrie Ann: “Nice comeback, really truly nice comeback, that was an ambitious routine.  Today huge shift back to the good side of things.”

Len: “What is this?  He gives them a standing ovation. Great technique, wonderful movement!”

Bruno: “You start with a soul that was absolutely exquisite.  You got the style beautiful, weightless, fluid.  It was like love in the great outdoors.  You performed it correctly.”

Carrie Ann: “Your feet were on the ground during the lift.  You have beautiful lines, but you are not dancing out enough.  I am serious.  You keep it too internal.  Bruno and Len disagree with Carrie Ann.”

Bruno:“Forget about the tractor you are the sexy – right on.  What I love about it was the fusion of coutry and cha-cha ! It was incredible!”

Carrie Ann: “I agree with Bruno what is good how you blended the two styles together.  You are exciting to watch.  I think the solo was a little bit stiff.  I thought it was still fantastic!”

Bruno: “I think that was the expressionism of gorgeousness over real women.  Classy and elegant you arms are gorgeous you can really tells a story with your fingers, just gorgeous.”

Len: “You coped well with a very difficult dance, it was clean, it was clear and it was sexy.  I would have preferred a little more hip action!  I liked it, but not that much!”

Bruno: “No question you are leading man, such ease.  You were graceful, you movements were excellent.  Your involvement with Karina was excellent!”

Len: “Apolo, son of Zeus the roman god of light and music.  It had great musicality, it was 2 people in perfect harmony.  I loved it!”

Carrie Ann: “Dance is without emotion, is movement for movement sake.  That was poetry in motion, every motion had so much intention.  I am so proud of you, that was your breakthrough numbers.”

Bruno: “Emmitt I love you, your attitude is brilliant.  I mean a times you lost a couple of passes.  It was a country fun fair”

Len: “It lacked a bit of finesse here and there but it was entertaining overall.”

Carrie Ann: “Unfortunately, when you came down the stairs you lost your timing.  But your solo made up for it all, it was fantastic!”

GROUP DANCE Each team has the chance to get 2 extra points.

Len: “That was fun, full of tricks and treats and the ho-down on the low-down.  Kirstie I like when you were smacking Maks’ bottom”

Carrie Ann: “This has been my favorite number since Drew and Cheryl performed it.  Everyone did a great.  Kelly and Val I loved it.  Sabrina, Gilles and Kelly you were my best!”

VERDICT: The performance that was the most fun and most entertaining.  Kirstie and Max get 2 extra points.