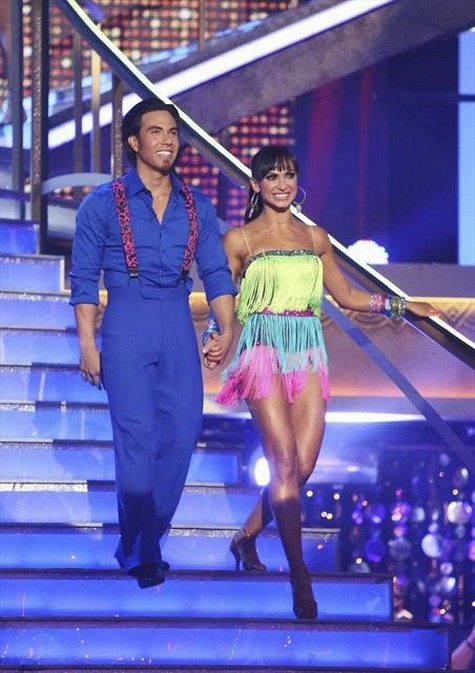 Apolo Anton Ohno  danced the Quickstep to Five Months, Two Weeks, Two Days by the Louis Prima for his performance tonight on Dancing With The Stars All-Stars 2012 Season 15.  All 12 couples hit the stage performing either the Jive or the Quickstep to impress the judges and viewers at home, hoping they’re not the first couple sent home.   We recapped the tonight’s show for you and if you want to see how all the couples did go HERE!

Apolo Anton Ohno and professional dancer Karina Smirnoff dancing the Quickstep.  Karina had this to say about their dance tonight, “I really, really think Quickstep is Apolo’s stronger dance. We have an amazing song. I think the routine is really fun. I can’t wait. I cannot wait for next Monday to show everybody.” Apolo agreed it will be “super fun.”

Judges Comments:  Len: “Gold medal, you’ve combined speed with control, well done.”  Bruno: “You’ve proved that hard work paid off, your footwork was great.”  Carrie Ann: “Someone put on his competition pants on tonight, you were truly driving the dance.”

Watch the video below and let us know what you think? Do you think Apolo did enough to win the Mirror Ball Trophy? Sound out in the comments below!