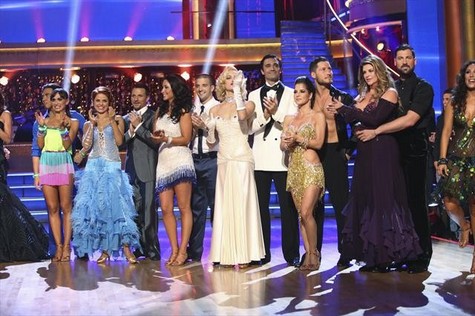 Tonight on ABC the glitz, the glamour and the drama returns once again to the ballroom on Dancing With The Stars All-Stars as we see the second performance show of the season.   On tonight’s show the 12 remaining Dancing with the Stars All-Stars couples are going to Jive or Quickstep their way to get one step closer to winning that coveted Mirror Ball Trophy.

On last week’s show Pamela Anderson Cha-Cha-Cha her way out of the competition with a score of 17.0. Anderson’s 10th season stint on DWTS landed her 6th place in the overall competition, with an average median score of 22.8.  Did you see the performance show last week?  We have a recap here for you!

Here are the dance assignments for the week.  Quickstep: Bristol Palin, Apolo Anton Ohno, Sabrina Bryan, Emmitt Smith, Joey Fatone and Kelly Monaco.  Jive: Melissa Rycroft, Helio Castroneves, Kirstie Alley, Drew Lachey, Shawn Johnson and Gilles Marini.  Who will be the next to go? What will the campy show deliver tonight? Who are you rooting for?  Apolo claims that he’s going to be the only dance contestant in the history of the show to take home the Mirror Ball Trophy twice. Do you think he has what it takes to do it a second time?

On Tuesday’s result show Katherine Jenkins, last season’s finalist and classical singer, who returns to the ballroom as a special musical guest. She will be taking the stage with Placido Domingo, performing “Come What May,” featured on Domingo’s new album, “Songs,” out October 16th.

The exciting lineup will continue with the season’s first “Macy’s Stars of Dance” performance, a futuristic standoff featuring some of the world’s most talented dancers battling for dance floor supremacy. The performance is choreographed by Shannon Mather, spotlighting Blake McGrath, Ian Eastwood and Tyne Stecklein leading their groups in an epic performance.  And before night’s end, the second couple of the season will be eliminated.

Tonight’s episode is going to have all the usual glitz and glam in the ballroom, which you won’t want to miss. So be sure to tune in for our live coverage of ABC’s Dancing With The Stars All-Stars Week 2 Performance Show – tonight at 8PM EST!  While you wait for our recap, hit the comments and let us know what you thought of last week’s episode of Dancing With The Stars All-Stars.

Last week we said goodbye to Pamela Anderson, nobody wants to be in the bottom two this week. We get started right away with our first couple.

Len: “The first one out sets the bar and they set it high, I love it.”

Bruno: “Melissa is the fastest girl in town, one of the fastest jives I’ve ever seen, but her footwork slipped a bit.”

Carrie Ann: “I’m so happy that I finally got to see Melissa jive and congratulations Tony on your choreography.”

Len: “I like the fun and enthusiasm, the technique was a bit of a low down.”

Bruno: “That was definitely different, it was like the Quick Step in the Wild Wild West, your hold wasn’t good, it was fun, but you need to work on it.”

Carrie Ann: “I think you have come so far, but you sold yourself too short tonight althoughI love watching you perform.”

Len: “You got style with a smile, we saw fun and entertainment but I thought you were pumping your knees too high.”

Bruno: “It was a sweet jive, Len is right your knees were too high but it didn’t take away from the fun of the dance.”

Carrie Ann: “Last week I was under whelmed, but this week your body caught up with the charm, you were right on.”

Bruno: “You’ve proved that hard work paid off, your footwork was great.”

Carrie Ann: “Someone put on his competition pants on tonight, you were truly driving the dance.”

Len: “This season the hits keep on coming, you kept all your upper body under control and worked your legs, a graet Quick Step.”

Bruno: “OMG, is it Miss Ginger Rogers, your variations and lines were superb, a true dazzler.”

Carrie Ann:  “Your top line is something I have never seen before, you had grace and drama, you were awesome.”

Len: ”It was neat, it was precise and a great improvement over last week.”

Bruno: “The girl works hard for her money, experience counts, you placed it beautifully you raunchy momma.”

Carrie Ann: “I know you are worried because you are the most mature, but you were great and I would love to see you match your moves more.”

Len: “What I like is that cool cat attitude, you were lacking technique, but I love the feel of the dance.”

Bruno: “The energy is great, the frame wasn’t great but overall silky smooth.”

Carrie Ann: “You are always easy on the eyes, but other dancers did better, you need to bring it.”

Len: “Bottom two Drew, not this week, but watch your footwork.”

Bruno: “Be careful, you go flat footed and you lose placement, but overall powerful.”

Carrie Ann: “Welcome home Drew, it was wild and edgy, but watch the footwork.”

Len:  “Poor posture, bad footwork.. but I really enjoyed it. If you can’t dance much, come out and entertain us and that is what you did.”

Bruno: “You do entertainment and we love you for it. Yes, technically it could have been better, there were some mistakes.”

Carrie Ann: “We are looking for technique, but I love fantastic performances and that was what we say, except for a few mistakes.”

Bruno: “It was exhilarating and eye popping, I don’t think you can give more.”

Carrie-Ann: “I agree, you guys are the all star sweethearts.”

Len: “I preferred the part that was out of hold, when you are in hold I don’t like it over all you did a great job.”

Bruno: ”Pretty in pink and really elegant but you need to watch your frame, it affects your top line, you messed a couple of steps.”

Carrie Ann: “You seem very confident with Val, but you need to extend your lines more, dance bigger.”

Len: “You got to be consistent and you were as well as dynamic and fast.”

Carrie Ann:  “It so much fun watching you dance, your kicks were fantastic, I see a little John Travolta happening.”