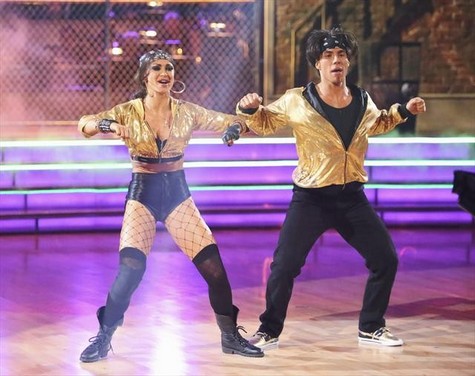 Apolo Anton Ohno danced the Samba for his dance on DWTS Guilty Pleasures Week.  Apolo and Karina chose to dance their samba to her guilty pleasure song “Give it to Me Baby” by Rick James on Dancing With The Stars All-Stars 2012 Season 15 tonight.  If you missed the show, we recapped tonight’s show for you and if you want to see how all the couples did go HERE!

Apolo Anton Ohno and professional dancer Karina Smirnoff, dancing the Samba.  Apolo had this to say about his dance, “The guilty pleasure’s like the song you sing when you’re in the shower.  It’s like the one you’re almost a little bit embarrassed that you love.” He said if this song comes on in his car and there’s no one else in the car — “just be lucky that the windows are not rolled down, ’cause I’m that guy, next to you, singing loud.”

Judges’ Comments:  Len: “I thought that was terrific.  Overall great movement around the floor, rhythm clean sharp movement.  Great Job!” Bruno: “I thought you were terribly sexy, your timing was good everything was good You did a great job, a really, really good job!” Carrie Ann: “I think your leg work is fantastic and the way you use the floor is amazing.  But, something is not right.  It is good but not where Apolo should be, the chemistry is a bit out of sync!”

Watch the video below and let us know what you think of Apolo’s performance? Do you think Apolo did enough to keep her around next week? Sound out in the comments below!